Vice President Mike Pence on Wednesday cast the re-election of President Donald Trump as critical to preserving law and order and economic viability, warning Democratic rival Joe Biden was a stalking horse for the radical left.

Amid widening protests over the police shooting of Jacob Blake, a Black man, in Wisconsin, Pence and other Republicans at their national convention described the Nov. 3 election between Trump and Biden as a choice between law-and-order and lawlessness.

“The hard truth is you won’t be safe in Joe Biden’s America,” Pence said in a speech that capped the convention’s third night.

Police in Kenosha, Wisconsin, shot Blake, 29, multiple times in the back at close range on Sunday, reigniting protests against racism and police brutality that erupted across the United States earlier in the year. 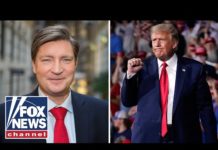 Listen: Why I Nominated Trump For The Nobel Peace Prize