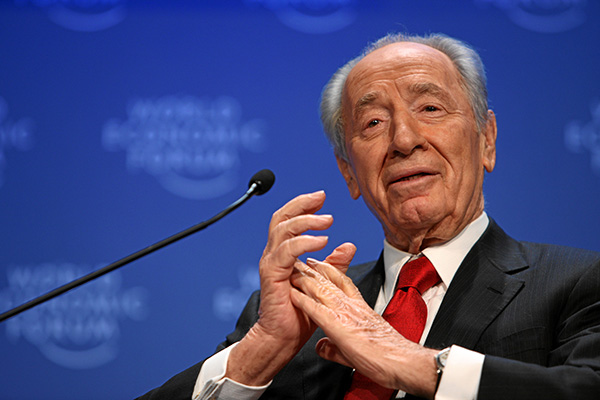 Shimon Peres, an Israeli statesman who helped build his country into a nuclear-armed regional military power, shared a Nobel Peace Prize for laying out a short-lived framework for peace with the Palestinians and more recently defended Israel’s controversial military actions in the Gaza Strip and Lebanon, died early Wednesday at a hospital in Tel Aviv, as first reported by Matzav.com He was 93.

The cause was complications from a massive stroke earlier in the month.

Peres, who held nearly every high office in his country and whose influence spanned 10 U.S. presidencies, was the last of a generation of politicians who came of age as Israel did and helped guide it through regional conflicts and economic restructuring.

In addition to having been the president and serving as prime minister three times – once briefly in an acting capacity – he had been foreign minister, information minister, finance minister and defense minister. It was during his time as defense minister that Israel pulled off the exquisitely orchestrated 1976 rescue of Israeli hostages at Entebbe International Airport in Uganda.

After more than a half-century of involvement in the most important events of Israel’s history, Peres had become “the grand old man of Israeli politics,” said Chuck Freilich, a senior fellow at Harvard’s international security program and a former deputy national security adviser of Israel. “You could feel his influence everywhere.”

Yet Peres left a complex legacy. At every stage in his political career, the European-born Peres had to fight the sense that he was insincere, consummately political and opportunistic. He never passed for an Israeli-born sabra and always seemed to be slightly removed from the country he led.

His Hebrew was tinged with a Polish accent, and his florid rhetorical style was at odds with Israeli directness. Israelis commented that even his carefully combed hairstyle seemed somehow European. He was never a combat soldier or an officer in the Israeli army, which he would later head as defense minister. The late prime minister Yitzhak Rabin, his longtime rival, once called him an “inveterate schemer.”

To many, Peres seemed a contradictory figure. Although he served as prime minister three times, he was never elected to the office and remained unpopular with voters. He projected intellectualism but had little formal education. He spoke of moderation and compromise but was notorious for his vitriolic feuds with other politicians.

As foreign minister, Peres shared the Nobel Peace Prize in 1994 with Rabin and Palestine Liberation Organization leader Yasser Arafat after helping to create a program for negotiating with the Palestinians that later stalled and sputtered out.

While still in his 20s, as director general of the Defense Ministry in the 1950s, Peres embarked on a sweeping program to make Israel a major military force. He negotiated with Germany for arms, cultivated a secret alliance with France, fathered Israel’s aircraft industry and made his country a nuclear power by building a 24,000-kilowatt reactor in the Negev desert.

In the 1970s, as defense minister, Peres encouraged Jewish settlers to claim land in the occupied West Bank, Gaza Strip and Golan Heights.

Yet, by the 1980s, he said peace with the Arabs could not be achieved through military means. As prime minister from 1984 to 1986, he pulled Israeli troops out of most of Lebanon, fostering a sense that war could end.

On the premise that a sound economy could promote peace, Peres devised a plan to lower inflation from more than 400 percent annually to less than 20 percent. He made overtures to Jordan and to the Palestinians, and he moved to thaw the cold peace with Egypt, which in 1979 had signed a peace treaty with Israel but remained aloof.

By the early 1990s, a growing number of Israelis were rejecting the occupation of the West Bank and Gaza Strip as morally wrong – on the grounds that it violated principles of democracy and equality; that it was demographically undesirable, because it brought millions of Palestinians under the authority of the Jewish state; and that it was militarily impractical, because it committed Israeli troops to confronting Palestinian civilians instead of the potential threat from foreign enemies.

Meanwhile, the Palestinians were ready to make a deal. The PLO was nearly bankrupt. Wealthy Arab donors had withdrawn financial support after the PLO backed Iraqi leader Saddam Hussein during the 1991 Persian Gulf War and other funding vanished after the collapse of the Soviet Union in 1991.

Peres, then foreign minister, authorized his deputies to pursue secret contacts with Palestinian leaders, including a track in Oslo.

“It’s not that I changed my character. I found a different situation,” Peres told Newsweek, speaking of the transformation in his policy.

In 1993, in a sudden and astonishing breakthrough, Peres and Rabin sealed the peace accords with Arafat, their mortal enemy, on the White House lawn under the gaze of President Bill Clinton.

“We live in an ancient land, and as our land is small, so must our reconciliation be great,” Peres said at the ceremony. “As our wars have been long, so must our healing be swift.”

The accords laid out a plan for incremental Israeli withdrawals from Palestinian areas in exchange for peace but delayed settling the most freighted and difficult questions until later negotiations.

“Anyone who believes he can frustrate historical processes with butcher’s knives or bullets fired from an ambush is deluding himself,” he told the Knesset, Israel’s parliament, the next month. “The world is parting ways with the hunters of human prey.”

Little went as planned. In 1995, Rabin was killed by a right-wing Israeli extremist at a rally in Tel Aviv. Peres succeeded Rabin as prime minister, took on his mantle of peace, and seemed poised to win the election on a sympathy wave.

But Israelis, angered by Palestinian suicide bombings, voted for center-right Likud party leader Benjamin Netanyahu, who opposed the Oslo peace process. Peres’s hopes for a “New Middle East,” an economically integrated place without borders, like the European economic bloc, began to seem anachronistic before they were realized.

Peres was born Shimon Persky on Aug. 2, 1923, in Vishneva, a Jewish shtetl in what was then Poland and is now Belarus. His father was a lumber merchant, and his mother a librarian and Russian-language teacher.

He attended a Zionist school that advocated the return of Jews the world over to the biblical land of Israel – then under British rule and populated largely by Palestinian Arabs.

After his family immigrated to Palestine in 1934, he joined a socialist youth movement and signed up for an agricultural school at Ben Shemen to remake himself in the Zionist ideal: as a farmer. As a young man, he changed his name to the Hebraized Peres, meaning vulture, after coming across a majestic bearded vulture while crossing the Negev.

His life would be defined by his people’s conflict with the Palestinians, and he recalled fear in his early encounters with them. “We would go out hiking in the Judean Hills almost every Saturday, picking wild anemones and narcissus, and sometimes we would go over to an Arab village,” Peres wrote later. “They seemed so strange to us, so terrifying.”

At school, he met his future wife, Sonya Gelman, the daughter of a carpentry teacher, and he courted her by reading aloud Karl Marx’s “Das Kapital.” She died in 2011. Survivors include three children, Tsvia Walden (sometimes spelled Valdan), Yoni Peres and Nehemia Peres, all of Israel; eight grandchildren; and three great-grandchildren.

While still a teenager, Peres began working as a youth organizer for David Ben-Gurion, the chairman of the Jewish Agency, the Jewish government in Palestine before Israel was established. In 1947, Peres joined the Haganah, a Jewish militia, and was assigned responsibility for manpower and arms.

After Ben-Gurion became Israel’s first prime minister in 1948, his young protege worked in the Defense Ministry; in 1953, he became its director general. Peres argued for the construction of a nuclear reactor at Dimona in the Negev and became intimately involved in such details as hiring engineers.

In 1959, he became a member of the Knesset, and a decade later, as part of the center-left Israeli Labor Party, he became a cabinet minister.

In 1974, when Rabin won the leadership of the Labor Party over Peres and became prime minister, he appointed Peres defense minister. Animosity marred their relationship. Rabin later wrote that Peres tried to undermine him by making public pleas for defense spending rather than negotiating in the closed discussions of the cabinet.

Peres helped rebuild the armed forces after the 1973 Yom Kippur War and campaigned to create Jewish settlements in the occupied territories. “Settlement everywhere” was his slogan.

In late June 1976, when a small group of terrorists hijacked an Air France plane en route from Tel Aviv to Paris and were allowed by Ugandan dictator Idi Amin to keep the hostages at Entebbe airport, Peres advocated a military rescue rather than negotiations.

He interviewed Israelis who had been close to Amin to create a psychological profile of the Ugandan – an effort credited with shaping the rescue effort – and presided over a plan to send Israeli commandos to the airfield. On July 4, about 100 hostages, most of them Israeli, were freed. Three hostages and one Israeli commando (Netanyahu’s older brother, Yonatan) were killed in the raid.

As part of a power-sharing arrangement with the Likud party, Peres, in 1984, became prime minister for two years and proved an effective, if overly deliberate, leader.

Yet even after succeeding the assassinated Rabin in 1995, Peres failed to win election to the position the next year. The Israeli killing of a leader of the militant Palestinian group Hamas unleashed a wave of suicide bombings in Israeli cities. Israelis wanted to punish the Palestinians, not make peace with them, and Peres was perceived as soft on terrorism.

And the bloody 1996 incursion known as Operation Grapes of Wrath, a campaign against Hezbollah in Lebanon, did not make Peres seem militarily effective. Instead, it was largely remembered for the Israeli shelling of more than 100 Lebanese civilians sheltering at a United Nations base in Qana.

Peres, who also lost the 2000 presidential election, continued to express his dream of a new Middle East through the Peres Center for Peace in Tel Aviv and in various books he wrote.

Peres was reborn politically when appointed foreign minister by hard-line Prime Minister Ariel Sharon in 2001. As Sharon took military action against the Palestinian uprising, Peres maintained contact with Palestinian leaders and offered explanations internationally and at home, telling journalists in 2002 that Israel’s campaign was a “war for our existence.”

In June 2007, as the Knesset elected Peres president of Israel, he gained unprecedented popularity at home, enjoying the status of elder statesman. He served as consultant to Netanyahu when the latter became prime minister again in 2009 and was largely viewed as a moderating force against Netanyahu’s hard-line policies, including threats in 2012 to bomb Iranian nuclear facilities.

“I expressed my opinion, and that was my duty,” Peres said. But he caused a rift with Netanyahu, who scolded him publicly, saying he had “forgotten what the president’s job is.”

That same year, President Barack Obama awarded Peres the Presidential Medal of Freedom, America’s highest civilian honor, calling him “the essence of Israel itself – an indomitable spirit that will not be denied.” The Israeli politician also received a Congressional Gold Medal in 2014.

Peres lived a life like that of his country, struggling to find a balance between security and peace.

“My life’s work is not yet done,” Peres wrote in his memoir. “The final, crowning chapters of my biography are still being written at this time. They deal with the subject closest to my heart – peace.”