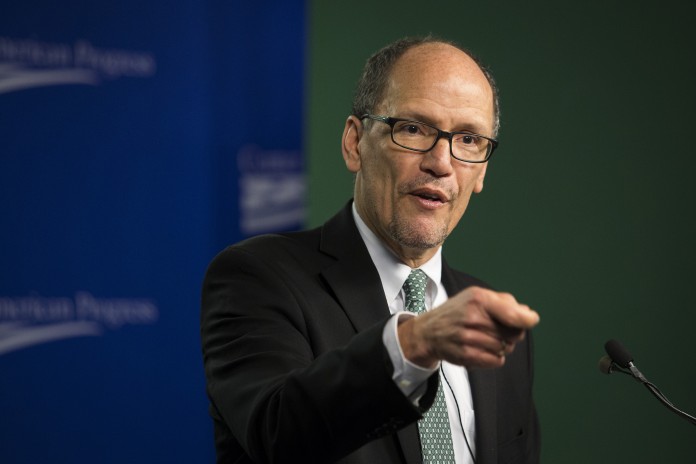 “With hard work and a hell of a lot of organizing, we will turn this party around,” Perez said before he had locked up enough votes to win 235 to 200 votes on a second ballot.

As Perez’s victory was announced, nine Ellison supporters chanted “power of the people, not big money,” then stormed out of the room.

“Someday they’re going to study this era of American history,” Perez said after his victory. “They’re going to ask the question of all of us: Where were you in 2017, when we had the worst president in the history of the United States? We will be able to say that the Democratic Party led the resistance, and made sure this was a one-term president.”

Onstage, Perez gave Ellison the symbolic role of deputy chair, and the Minnesota congressman gave a short speech asking his supporters to stay with the party and avoid recriminations. “We don’t have the luxury to walk out of this room divided,” said Ellison.

Former president Barack Obama congratulated “my friend” in a statement: “I know that Tom Perez will unite us under that banner of opportunity, and lay the groundwork for a new generation of Democratic leadership for this big, bold, inclusive, dynamic America we love so much.”

Ellison’s defeat was a blow to the party’s liberal wing, personified by activists, labor leaders, and organizers who had come to Atlanta to cheer him on. Supporters of Sen. Bernie Sanders, I-Vt., who had lobbied hard for Ellison, worried that the party was alienating the growing “resistance” that has organized against President Donald Trump.

“If you polled Democrats outside of this room, Keith would win,” said Jeff Weaver, Sanders’s campaign manager during his 2016 presidential bid. “Keith’s support is from the people on the street.”

The vote itself was tense. On Friday night, Democrats gathered at a downtown Westin hotel to meet, drink and lobby for votes, and the Ellison campaign – along with allies of South Bend, Indiana, Mayor Pete Buttigieg, a third candidate – battled rumors that Perez might have locked up the needed votes.

But by Saturday morning, it was clear that the race was up for grabs. Buttigieg used his nomination speech to quit the race, endorsing no candidate. As the 439 present DNC members cast their votes – eight eligible members did not attend – several DNC members got a text from the Ellison camp, saying the congressman was “grateful to have the support of Mayor Buttigieg.”

After the mayor denied the text, in the first ballot, Perez won 213.5 votes to 200 for Ellison, 12 for Idaho Democratic Party Executive Director Sally Boynton Brown, 0.5 for Democratic strategist Jehmu Greene and 1 for Buttigieg. Greene endorsed Perez, while two fringe candidates who had won no votes backed Ellison. Overseas balloters get half a vote.

Perez’s victory did not represent a Democratic shift to the right. On key issues, Perez’s platform mostly resembled Ellison’s. Perez promised to refocus on small donors and online fundraising; Ellison set a goal for “low-dollar contributions from everyday Americans [to] account for 33 percent of revenue.” Ellison called for an “Innovation Hub” in Silicon Valley; Perez promoted DNC fellowships to “encourage developers, programmers, data scientists, [and] engineers.”

While Perez and Ellison praised each other personally, the race was defined for outsiders by Sanders backing Ellison. Ellison was one of very few members of Congress who had backed Sanders for president. He billed himself as the “unity candidate” who would keep Sanders’s restive supporters in the party while embracing supporters of Hillary Clinton.

Howard Dean, the most successful chair in modern party history, dropped his plans to run again when Ellison said he’d resign from Congress if elected to the full-time job. Senate Minority Leader Charles Schumer, D-N.Y., who had frequently clashed with Dean over strategy and investments, endorsed Ellison and defended the first Muslim member of Congress against charges of anti-Semitism.

But veterans of the Obama administration, where Perez had been a popular, progressive force, encouraged him to run – and starting on Dec. 15, he did. In progressive media, the race was frequently covered as a clash between “the establishment” and the “revolution” that had been proven right by the 2016 election.

That wasn’t how most DNC members chose to see it. Over public forums, the final one broadcast on CNN this week, Ellison and Perez declined to criticize each other. While progressive media accused Perez of protecting the party’s consultant class, DNC members who broke for Perez said that he’d convinced them that he knew what state parties needed.

“Tom seemed to have a better handle on the job,” said Kathy Sullivan, the former chair of New Hampshire’s Democratic Party, who endorsed Perez after current state chair Ray Buckley quit the race.

Perez was also helped by a string of endorsements from Obama administration veterans – though, as Ellison backers noticed, he did not win any high-profile supporters of Sanders to compete with Ellison’s endorsements from Clintonites. The Feb. 1 endorsement of Perez by former vice president Joe Biden, one of the party’s most beloved figures, prompted Sanders to criticize Perez for the first time.

“Do we stay with a failed status-quo approach or do we go forward with a fundamental restructuring of the Democratic Party?” Sanders asked in a statement after Biden’s endorsement. “I say we go forward and create a grassroots party which speaks for working people and is prepared to stand up to the top one percent.”

Most of the DNC’s membership – just 39 of whom had backed Sanders for president in 2016 – disagreed that the choice was that stark. Sanders supporters, including Ellison, had largely succeeded in moving the party’s platform left. In interviews, some acknowledged that there would be walkouts by Sanders die-hards in their states, but that the daily outrages around Trump might bring them back into the process.

That confidence was displayed before the vote on the chair, as DNC members debated whether to strike language from California’s Christine Pelosi that would have restored a ban on corporate donations to the DNC that was quietly rolled back under the controversial tenure of former DNC chair Rep. Debbie Wasserman Schultz, D-Fla.

“This resolution has nothing to do with nonprofit organizations,” said Larry Cohen, the former president of the Communications Workers of America who had backed Sanders in 2016. “This is to send a message, loud and clear, that the DNC itself – not candidates, not state parties – will restore the ban that President Obama put into effect.”

When the language was struck, a few of the activists who had come to cheer Ellison – from members of National Nursed United, to the Progressive Change Campaign Committee, to Democratic Socialists of America – started a brief chant.