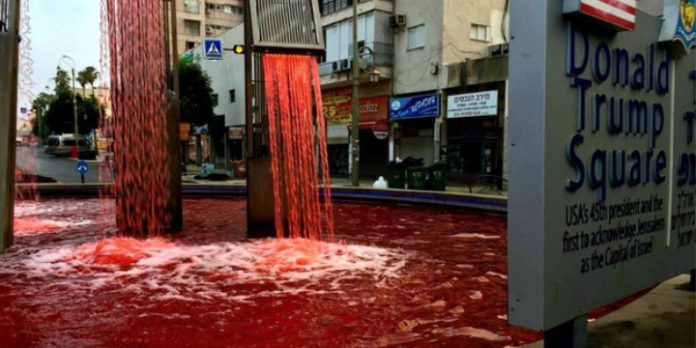 As a public statement against the potential annexation of parts of the West Bank, protesters vandalized the fountain in “Trump Square” in the central Israeli city of Petah Tikva.

Israeli news site N12 reported that the water in the fountain dedicated to US President Donald Trump was doctored with a red dye, giving the liquid the appearance of blood.

Graffiti alongside the fountain read: “Annexation will cost us blood.”

“There are steps that there is no way to take back,” the anonymous protesters told N12, describing annexation as “a security and economic nightmare.”

“All this because of politicians who are playing with fire at the expense of the citizens in a time of economic crisis,” they added.

“Trump Square” was established last July in appreciation of what municipal leaders saw as the US president’s support for Israel.