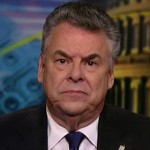 “Nothing the president proposed or spoke about had any relevance or connection to the San Bernardino massacre,” the New York Republican said in a statement. “Once again he failed to say that our enemy is Islamist terrorism. Nor did he call for increased surveillance of the Muslim community. Instead he tried to raise the phony specter of Islamophobia.

“The truth is that the Obama policy against ISIS has failed totally and his speech totally failed to address or correct that failure! Nothing he said will calm the fears of the American people.”