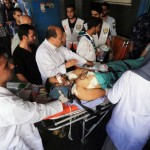 A new Pew Research Center survey conducted July 24-27 among 1,005 U.S. adults shows that about twice as many Americans blame the terrorist group Hamas (40 percent) as opposed to Israel (19 percent) for the current conflict in Gaza.

The study echoes the findings of a different Pew survey conducted earlier this month, which showed that nearly 73 percent of Republicans sympathize more with Israel than the Palestinians, compared with 44 percent of Democrats.