The Jewish Exponent reports: At New York Bagel on Haverford Avenue in Philadelphia, owner Nick Abdoul has been baking the bread with holes for more than a decade. Poppy seed, sesame seed, onion, salt, everything — he makes them all inside the small Philadelphia shop, which, other than the kitchen, consists of little more than a few display cases and a bit of counter space. By and large, not a lot has changed in 12 years.

But Abdoul recently posted a notice near the cash register about an important difference — and that’s meant a big shift in how the store does business.

As of Oct. 9, items at New York Bagel, which are pareve or dairy, fall under the Conservative kosher supervision of Vaad Hakashrut. Before that, the shop was supervised by Community Kashrus of Greater Philadelphia, which gives an Orthodox certification.

The shop will now be open on Shabbos.

Since Abdoul is not Jewish, and is therefore not required to keep Shabbos, he can bake and do business on Saturdays, according to Rabbi Robert Rubin, who oversees Vaad Hakashrut.

The shift in certification is frustrating some regular customers, and also highlights the complexities of what makes a store kosher — and in whose eyes.

“We depend on Nick, and it’s very disappointing to hear that the Orthodox community is not being served,” said Henchy Abraham of Wynnewood, who’s been coming to the shop for years. 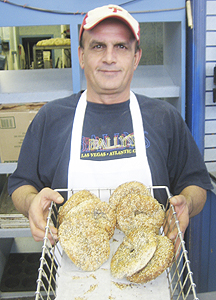 The decision wasn’t an easy one for Abdoul. He said that his ties with the Orthodox community represent “the best relationship I ever had.”

In the end, however, he said that it came down to economics.

“I’m trying to pick up more customers, and Saturday is a big day for bagels,” he said.

The change was something Abdoul said he’d been thinking about for three years; without these modifications, he might have had to close the store.

He pointed out that a number of kosher establishments in the area have folded in the last few years, and his business has declined as well, including fewer catering orders and fewer Orthodox customers.

Furthermore, he explained, many people now buy from the kosher bakery department at the Acme supermarket in nearby Narberth.

Supervised by the Orthodox Union, it stays open on Saturdays; baked goods, all pareve, are made by non-Jewish employees.

The O.U.’s policy, explained Rabbinic Coordinator Rabbi Leonard Steinberg, is that retail stores must close on Shabbos. However, Acme falls under the category of a factory-run business and can operate; if it were to close, then no shoppers at all would get freshly baked goods, including the majority of non-Jewish shoppers there, he said.

Rabbi Steinberg did acknowledge that some prepackaged baked goods, also under O.U. supervision, sit on the shelves 24/7.

He added that there’s nothing in halachic law that precludes giving kosher status to a bakery open on Shabbos, explaining that it’s more an issue of how things are perceived.

“It’s about the trust gauged by customers” — it’s about appearances, said Steinberg.

Officials at Community Kashrus of Greater Philadelphia did not return calls for comment.

For Abdoul, one thing that sealed the deal for Saturday sales was that there was no uptick in business this year surrounding the High Holidays. Because of the way this year’s holidays fell, he had to close the store on three Sundays — his busiest day — within a single month.

In the end, Abdoul said, “it really was a very hard decision to make and lose all my Orthodox friends.”

Although business remains slow due to the recession itself, Abdoul said sales have picked up on Saturdays since the new supervision has taken effect.

And he insisted that even if the certification is different, his food hasn’t changed; the ingredients and recipes are the same as they were before.

“We have different papers now — that’s all,” said Abdoul.

Of course, like any realistic businessman, he did note that he could revert to his former arrangement, if need be.

A more positive view of the situation was offered by a regular, Avi Damari of the Northeast, who said that it’s a good thing the business will now be open on Saturdays — he likes his sesame bagel with chives and lox — and lamented the fact that “the community doesn’t support people who help the community be in business.”