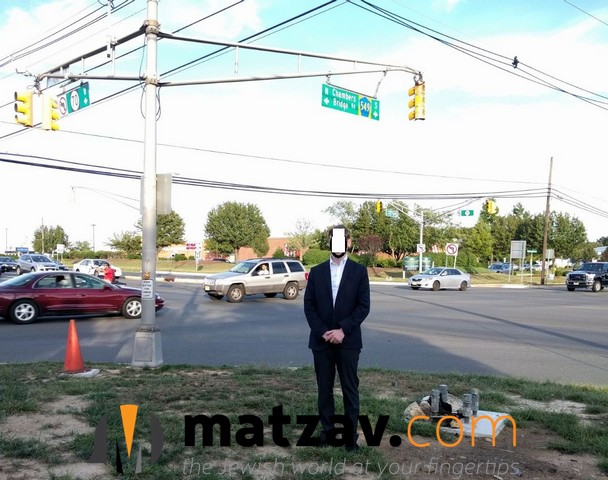 It was an emotional moment for a yeshiva bochur this week when he returned to the site where he was almost killed in a frightening car accident three months ago.

On June 3, three yeshiva bochurim were injured in a car crash near the border of Lakewood, NJ, and Brick, NJ.

The boys were in a Nissan Altima, when a Dodge Durango being driven by a young woman ran a red light at the intersection of Route 70 and Chambers Bridge Road and slammed into the vehicle. The Altima flipped over several times before coming to a stop on the grass.

There were two bochurim seated in the front seats of the car. They were in stable condition. A bochur in the back seat, Yehuda Nesanel ben Basha Baila, was seriously 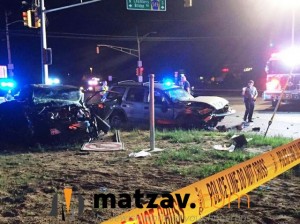 injured and taken in critical condition to Jersey Shore Medical Center in Neptune, NJ, where he spent several weeks under the care of a team of physicians, first in the Intensive Care Unit and then in a different wing of the hospital. He underwent multiple surgeries and faced a lengthy road to recovery.

Yehuda Nesanel, who hails from Monsey, NY, and is a talmid at a bais medrash-level yeshiva in the Lakewood area, convalesced at home over the summer. He recently returned to his yeshiva for the new zeman and went, for the first time since that fateful day in June, to the very spot where he was critically injured to recite the brachah of ‘she’asa li neis bamakom hazeh.’

“I am deeply grateful to the Ribono Shel Olam for the yeshuah I have merited,” he said. “And I have immense hakoras hatov to all those who davened for me or assisted me, so that I have been zocheh to be where I am today.”