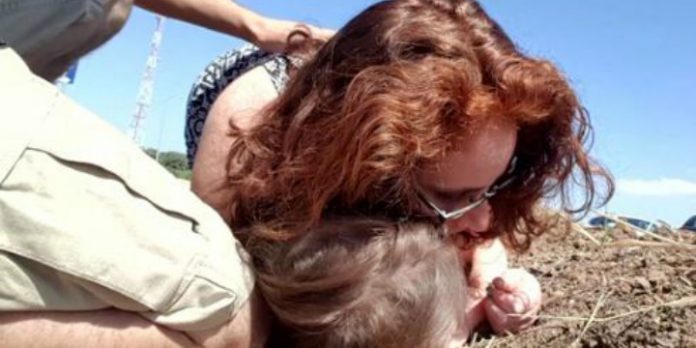 A picture of a young pregnant mother protecting her two-year-old daughter with her body during rocket fire on southern Israel over the weekend has gone viral.

According to Hebrew news website Mako, the dramatic photo was taken by the child’s father, who was protecting the two from above.

The family lives in Moshav Ge’a in southern Israel, a few miles from the city of Ashkelon. The area has taken massive rocket fire from Gaza over the last two days.

Lihi Piatzsky, who is expecting her second child, said, “We’re very well trained for this, when we’re in an area with a secure space, or when there is no secure space, we defend [our child]. … We listen to orders from Home Front Command. That’s what we do without thinking very much and very quickly.”

“This was the first time the child experienced this,” she added, “because most of the time [the rocket attacks] were at night.”

“She’s all of two years old. I don’t know how, I just protected her, I said to her that we’re protecting her because there was a siren, even though she really wanted to get up and asked to get up,” Lihi said.

The girl’s father, Elon, recounted that he originally sent the picture to family and friends “so they could see what was going on with us.”

Israel’s military said more than 450 rockets, many of them intercepted by its Iron Dome anti-missile system, have been fired at southern Israeli cities and villages since Friday, and it struck some 220 targets belonging to Gaza terrorist groups. Three Israelis have been killed in the attacks. Two Gaza civilians, including a young child, have also been killed by Hamas rockets, according to the Israel Defense Forces.

The latest round of violence began two days ago when an Islamic Jihad sniper fired at Israeli troops, wounding two soldiers, according to the Israeli military.