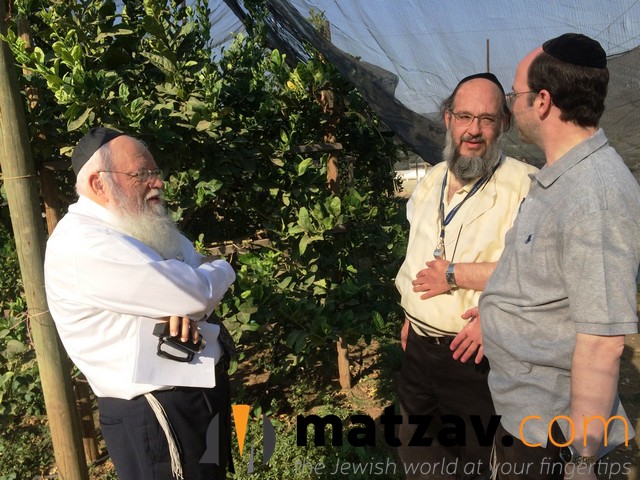 With magnifying glasses in hand, the yungeleit examine and inspect each esrog for any imperfection or defect. They sift through countless boxes in search of the perfect find. The printed words on the outside of the boxes read “Esrogei Rothberg M’California,” giving an indication as to the origin of these sought-after fruits.

Who is behind this all? What process do the esrogim go through until they are used for Daled Minim on Sukkos?

Matzav spoke with the proprietor, Rabbi Yaakov Shlomo Rothberg, his manager, Rabbi Yissoschor Steinharter, and farmer Mr. John Kirkpatrick to get an inside account of the numerous details involved every step of the way.

It all began approximately thirty-five years ago, six Shmittahs back, when Rabbi Yaakov Shlomo Rothberg’s brother-in-law, Rabbi Yisroel Weisberger, wondered why we must import esrogim from Eretz Yisroel. Why couldn’t they be grown in America? He researched the idea and, after much investigation, was directed to Mr. John Kirkpatrick of California to assist him in finding the right person for the job.

“It was in the fall of 1979 when I got a call from a man by the name of Yisroel Weisberger,” John Kirkpatrick told the Matzav. “He had gotten my number from the Agricultural Commissioners Office, as he was looking for the perfect candidate to grow a special fruit for him.”

The two of them spoke for close to an hour, as Rabbi Weisberger depicted all the details pertaining to the growing of an esrog. When the conversation was drawing to a close, R’ Yisroel once again asked Mr. Kirkpatrick if he has any names to suggest of someone who would be appropriate for this endeavor. The farmer responded, “I believe that you are speaking to the person at this very moment!”

Mr. Kirkpatrick nostalgically shares the feelings he first had when introduced to this concept and his perspective on the observance of the mitzvah of Daled Minim.

“The idea was entirely new to me,” he said. “It wasn’t something that I ever heard of or knew anything about. One thing that came as a surprise to me was the intensity that comes along with this project. Perfection in growing an esrog is completely different than the other fruits growing in my orchard. It was an adjustment at first, but with time, I did learn and become accustomed to it all.”

Mr. Kirkpatrick has been in the business of growing citrus fruits most of his life. Agriculture is a profession that runs in the family. John’s son, Greg, has joined the business too. “He’s been involved in a small way for about fifteen years now, but over the past seven to eight years, he’s been significantly more involved,” says. Mr. Kirkpatrick.

The farms – fifty-one acres of land – include approximately five thousand trees of citrons, oranges and pomegranates, amongst various other fruit. The farms are located in Central Valley California, which is about one hundred miles inland from the coast in the Sierra Nevada Mountain Range.

“The citrons/esrogim alone cover four acres of the farm on several hundred trees,” explains the farmer. “Caring for the forty-seven acres of regular fruit would not require any full-time workers. I would just need to hire seasonal workers when necessary, several times a year. Although the patch of farm that contains esrogim is only four acres in size, cultivating esrogim is an intense, year-round job for which I have hired seven full-time workers to assist me in their growth and development.”

In 1995, Rabbi Yaakov Shlomo Rothberg took over the esrog business from his brother-in-law and he has been running it ever since.

Rabbi Rothberg expounds on the different minim of esrogim: “When we first started out, we didn’t have a variety of types, but over time we were able to acquire five of them – Kivelevitz, Lefkowitz, Halpern, Braverman and Taimani. We got each one from the original source, giving the esrogim a sterling yichus.”

Even during a non-Shmittah year, many people prefer to buy their esrogim from Esrogei Rothberg M’California, confident with the yichus of their product.

Numerous customers have been heard to comment, “During a Shmittah year, when the esrogim are high in demand, we expected the prices to skyrocket. However, this was not the case with the Rothberg esrogim. The prices were the same as the previous years.”

Rabbi Rothberg keeps his customers in mind throughout it all.

A tremendous amount of time and resources are invested in the growing of the fruits to enable them to develop into beautiful esrogim.

“Properly caring for the esrogim is a year-round job,” Mr. Kirkpatrick says.

R’ Yaakov Shlomo himself travels to California approximately eight times over the course of a year to oversee the process.

“Throughout the winter, precautionary measures must be taken to ensure that the trees don’t freeze,” he says. “Of all citrus fruit, citron trees are the most frost sensitive.”

Rabbi Steinharter adds, “We’ve had problems in the past with the trees freezing over, which caused a tremendous setback in their growth. In one such instance, we traveled to Eretz Yisroel to obtain esrogim from there in order to accommodate our customers. However, over the years, we’ve been improving our methods and constantly researching new techniques with the hope of preventing any further freezing.”

Great measures are taken to avoid black dots on the esrogim. Mr. Kirkpatrick explains that the pesticides cause some of these spots, and he therefore tries to minimize the usage of them. In the event that they are extremely necessary, he uses the softest, most environmentally friendly chemicals available.

Although the farmer is well-versed in many halachic aspects of the esrogim, such as harkavah and orlah, as a result of his many years of working in the esrog field, that alone wouldn’t suffice. In an effort to have proper, on-site supervision, Rav Avrohom Teichman from Los Angeles serves as the rav hamachshir on the farm to ensure that all is done in accordance with halachah.

“As the buds begin to grow and the esrogim start to take shape,” says Rabbi Rothberg, “the branches of the trees are tied down to stabilize the esrogim. By doing this, we are able to avoid any banging around, or the fruits bumping into each other and getting scratched by thorns. This is a tedious, manual and time-consuming job, requiring a lot of patience and effort.”

During the month of Av, the procedure of harvesting the esrogim begins. An incredible amount of manpower is required to prevent any damage from taking place. Rabbi Steinharter provides some insight: “As each esrog is removed from the tree, it is placed in a box with foam. From there, it is brought to a packaging house, where each one is hand washed and dried.”

He points out the fact that many other fruits are washed in this packing house as well. However, all other types of fruit are machine washed in bulk, unlike the esrogim, which are washed manually.

“After they are properly dried, the esrogim are placed in a refrigerator, where each one is graded according to its chashivus,” he says. “The fruit is analyzed and a value is decided for each one.”

Esrogim span the entire quality spectrum, from “chinuch esrogim” intended for young children for the price of nine dollars to the extremely rare, perfect esrog sought by select individuals ready to spend up to thousands of dollars. The standard retail price for esrogim ranges between one hundred twenty and two hundred dollars.

“They remain in the refrigerated area until they are ready to be sent via overnight shipping to their correct destination,” says Rabbi Steinharter.

Esrogei Rothberg M’California has retail stores in Williamsburg, Monsey and Flatbush, as well as two additional stores in Lakewood aside from the main location. In addition, they supply esrogim to many other dealers in the tri-state area.

“This is by far the busiest time of year,” states Mr. Kirkpatrick. “It’s the time when we harvest and ship.”

“Mass shipping to Eretz Yisroel is not something that we do for various reasons,” explains Rabbi Rothberg. “The Ministry of Agriculture in Eretz Yisroel does not allow for the esrogim to be brought in. In addition, there is a greater chance of damage when the esrogim are shipped a tremendous distance.”

Specifically this year, following Shmittah, many people would have liked to have esrogim shipped, but Rabbi Rothberg feels that in a year with such a shortage in America too, it is unfair to send the esrogim overseas.

The Rothberg esrogim are generally harvested long after the pitoms have fallen off. However, since customers have recently been requesting esrogim with pitoms, the agricultural experts at Esrogei Rothberg M’California have been researching to find different ways to grow them to preserve the pitoms. Over the course of the past few years, they have seen much success and will continue these methods to accommodate the public.

With a product as delicate as esrogim, it is intriguing to learn how the process of checking, buying and returning works. Rabbi Rothberg enlightens us. As a grower, he is able to afford his customers the opportunity to see a large volume of esrogim that are laid out on a table all at once, as opposed to viewing individual esrogim one at a time.

“We caution the customers to use extreme care while handling the esrogim to avoid any bruises or bumps,” he says. “On occasion, there will be some damage done to an esrog, but that is to be expected. As far as taking it to a rov, until Yom Kippur customers can take one or two to a rov to show them to him, but the customer must bring them back by the next time the store is open. After Yom Kippur, we only allow returns if the rov paskens that it’s posul.”

“Several aspects changed over the years,” Rabbi Steinharter adds. “The community grew and so did the need for esrogim. We are constantly trying to improve our crop to meet the challenge of providing everyone with a choice esrog. However, it’s all siyata diShmaya. Some years, we grow more, and some years we grow less. We can’t control the outcome.”

Many people choose to purchase their esrogim from Esrogei Rothberg M’California because they are the growers of their esrogim. They are given the opportunity to obtain every esrog that is harvested, as opposed to someone who sells second-hand and only has in his possession what was sold to him. This also gives customers of Rothberg esrogim a chance to purchase a beautiful esrog even close to Sukkos, because the farmer is constantly harvesting the fruit and shipping it to Lakewood. As of Motzoei Rosh Hashanah, he had shipped 75% of the esrogim, leaving 25% available for those who waited a bit longer.

Esrogei Rothberg M’California accommodates customers by selling lulavim and hadassim in addition to their esrogim. This allows people to buy their Daled Minim sets at one location.

Rabbi Steinharter ends by saying that he wishes people would realize that the esrogim are not overpriced. “The amount of time and money invested into producing the finest esrogim is exorbitant. Things can go wrong throughout every stage, and even once the esrogim are ready to be picked, a windstorm can come and damage the esrogim. A FedEx delivery can mess them up too.”

Kirkpatrick thanks the families who have visited his farm and invites those who are in California to stop by. He encourages visitors and recommends that you call before to schedule a time.

“There is a lot of satisfaction in doing a job well while also earning a decent living,” he says. “For me and my family, it was a journey in Judaic culture and it’s been a great experience!” 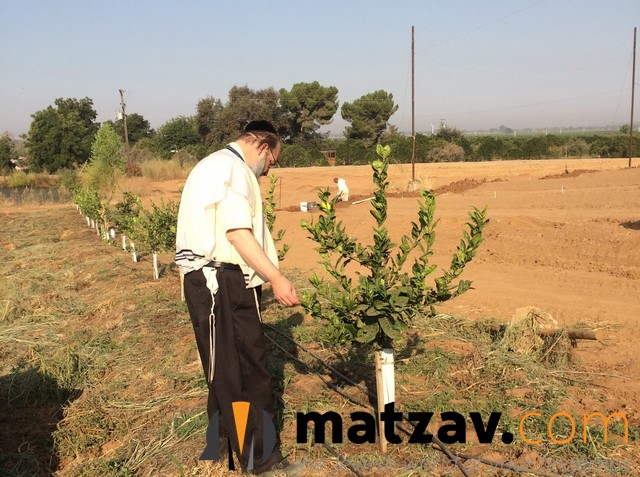 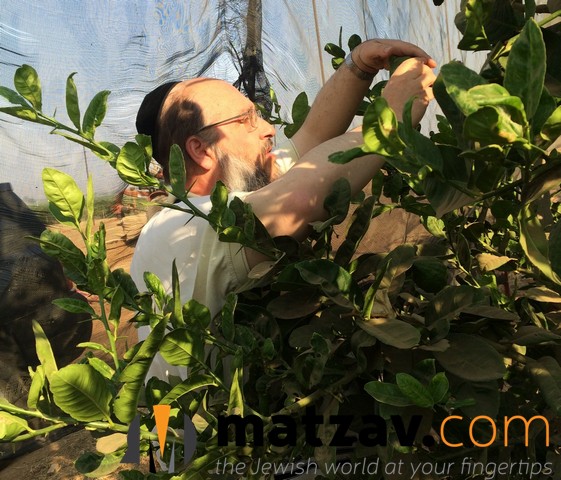 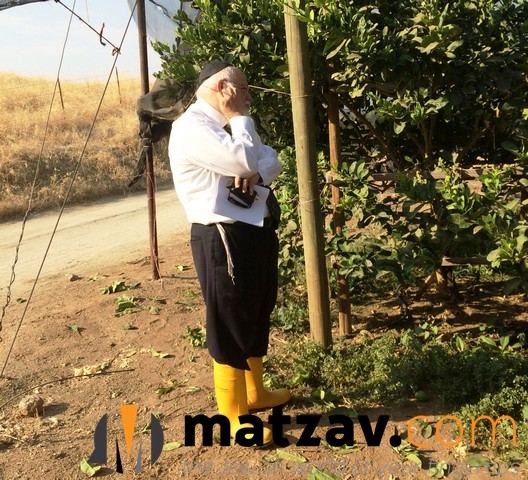 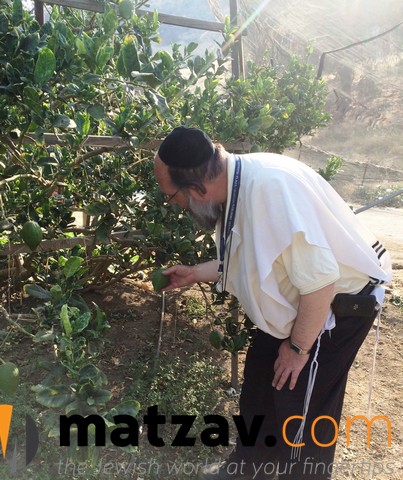 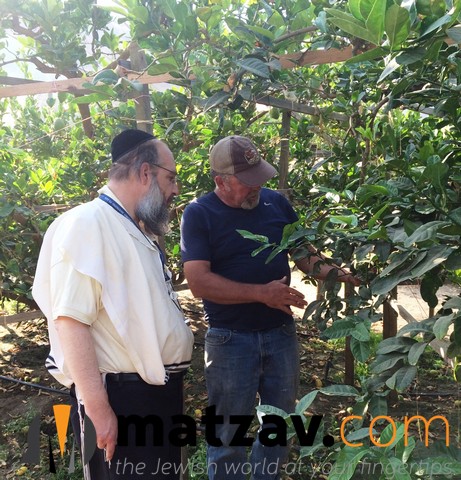 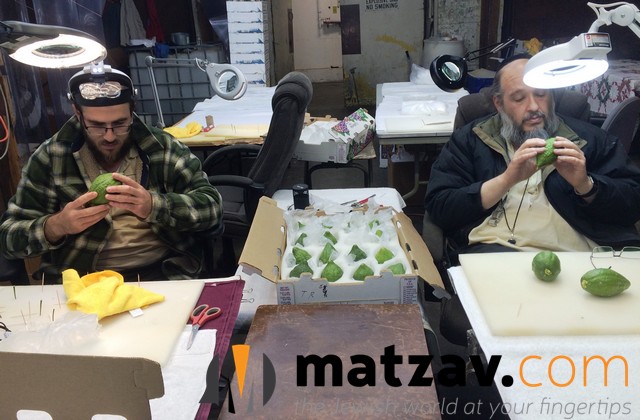 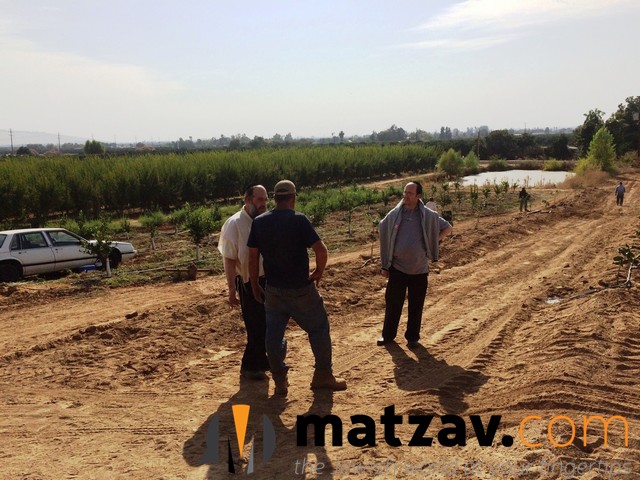 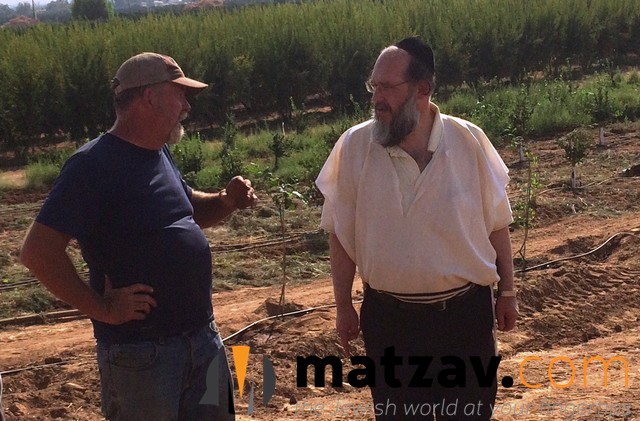 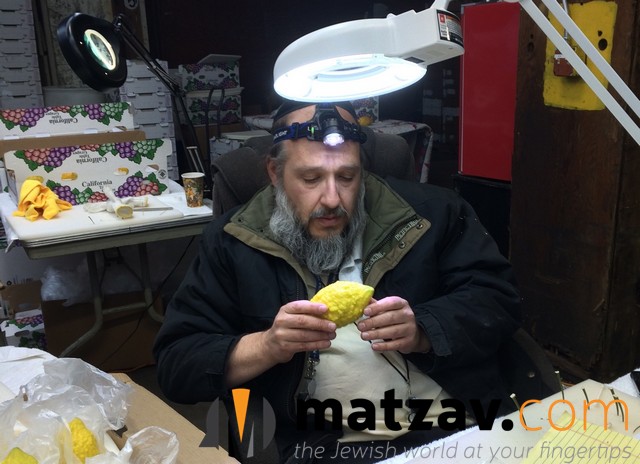 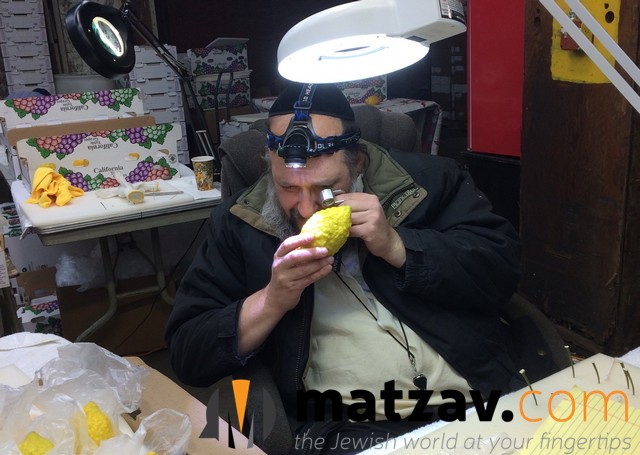 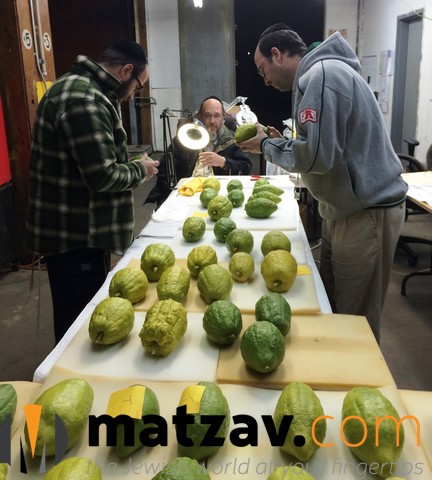 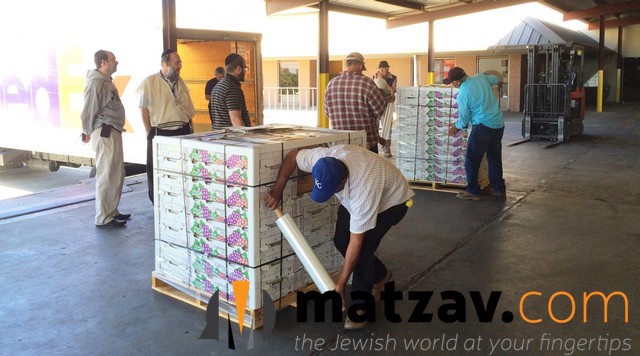 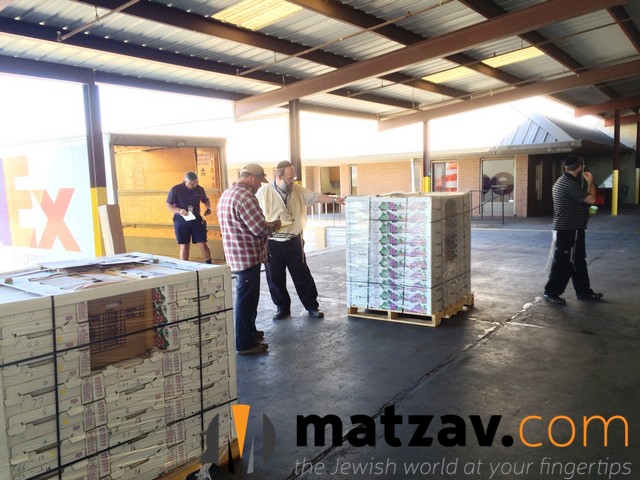 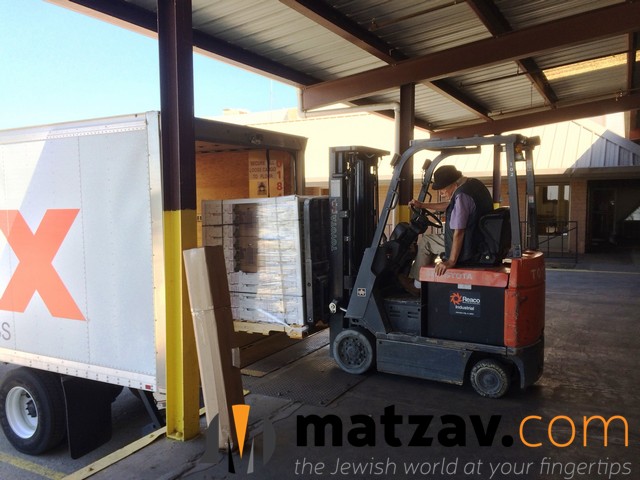 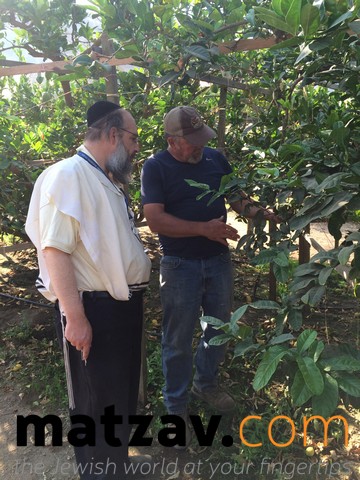 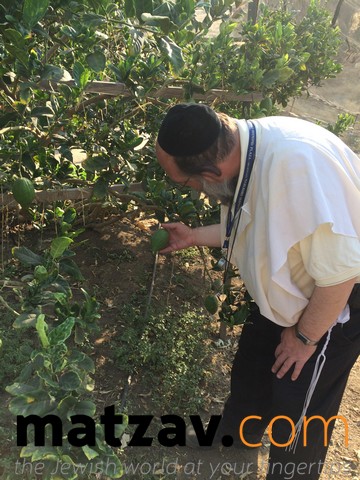 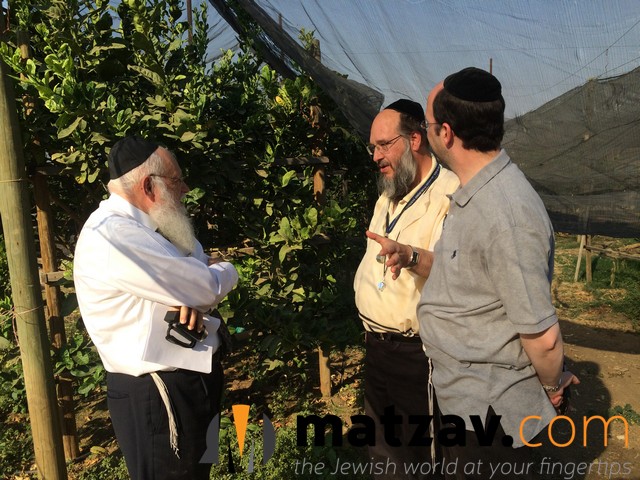 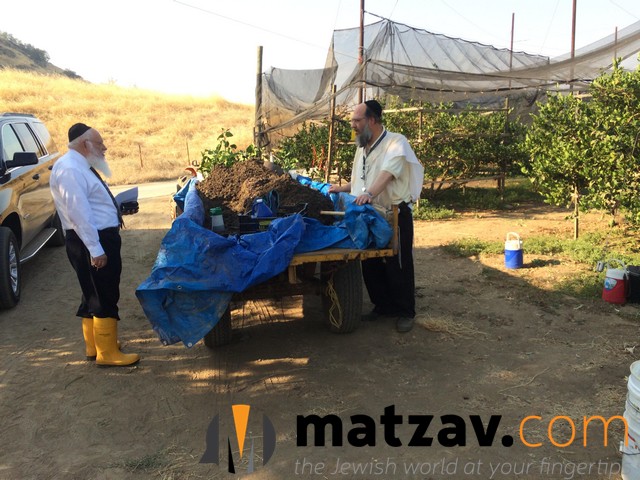 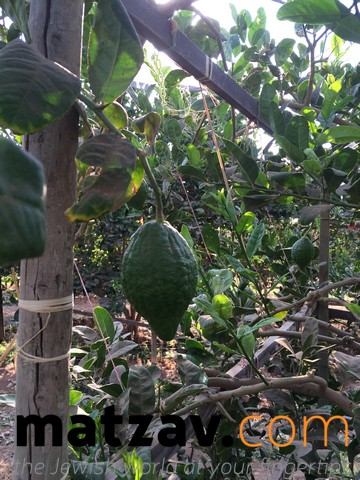