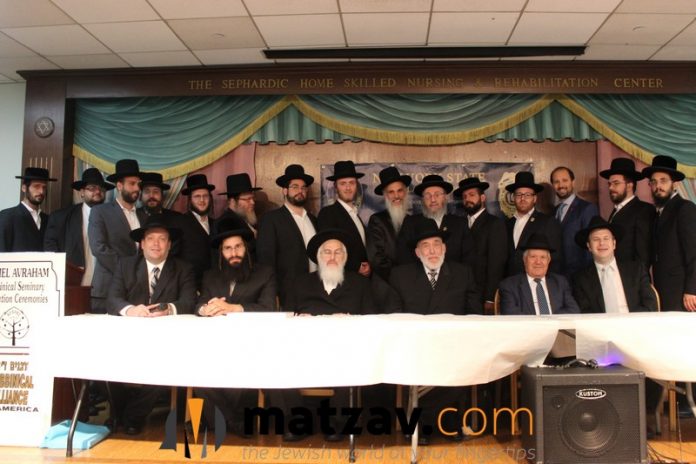 A palpable electricity filled the air on Sunday evening, September 25th at the synagogue of the King David Center in the Bensonhurst section of Brooklyn as dozens of musmachim from around the globe gathered for the 8th Chag HaSmicha of the prestigious Kollel Ayshel Avraham. Unlike other rabbinical ordination ceremonies, the historic and truly unique nature of this Chag HaSmicha was truly tangible, as musmachim from Kollel Ayshel Avraham have committed themselves to serving in leadership roles in Klall Yisroel.

“Each of these musmachim will go on to serve their people in the chaplaincy; they will work in hospitals, prisons, and centers for troubled youth. They will also assume roles as pulpit rabbis in shuls, as rebbeim, as dayanim and chazzanim,” said Rabbi Yechiel Malik, the Director of the Orthodox Jewish Division of the NYS Chaplain Task Force as well as the Rov of Congregation Ahavas Achim Lvov in Boro Park.

Founded more than 20 years ago by the Rosh Kollel, HaRav Yaakov Spivak, Shlita, the Monsey based rabbinical seminary has graduated hundreds of rabbis who have gone on to serve Klal Yisroel in a multitude of capacities.

As the musmachim, rabbonim and their families took their seats in the spacious hall at the King David Center, the evening’s erudite and affable master of ceremonies, Rabbi Mendel Mirocznik warmly welcomed the exuberant attendees in his introductory comments. Himself a musmach of Kollel Ayshel Avraham, Rabbi Mirocznik is currently the Executive Vice President of the Rabbinical Alliance of America, and is also the President of the Council of Jewish Organizations (COJO) of Staten Island.

Speaking of the concept of Teshuva was Rabbi Yaakov Klass, Shlita, the Torah editor at The Jewish Press and Rabbi of Congregation Bnei Matisyahu of Brooklyn. He is also a presidium member of the RAA and Shoel u”Meishiv of Kollel Ayshel Avraham. “Teshuva is precisely what chodesh Elul is about. During the Yomin Noraim we remember the haftorah in Yeshayahu; ‘Seek out the Ribono Shel Olam, when He can be found. Call out to Him when he is very near.’”

Rabbi Klass told the assemblage that a return to Hashem must come with a full heart, and must be motivated by the sheer will of an individual. He added that the greatest impediment to teshuva was “narishkeit” (nonsense) and quoted the Vilna Gaon who said that a poshite Yid (simple Jew) was on a great level of understanding in that he saw the greatness in the Bais HaMikdash. “A person has bechira (free will) but when we allow all the distractions and ‘noise’ of life overwhelm us, we are at a disadvantage when doing teshuva.

He told the musmachim that “some of us can make baalei teshuva when they speak. A person may see you and want to connect with you based on how you speak, and how you behave. You have the ability to bring others to teshuva based on the example that you set.”

Rabbi Mirocznik then introduced Rabbi Yechiel Malik. “In addition to his role in the New York State Chapaincy, Rabbi Malik, is also a Menahel, a Rebbe, a Posek and a Dayan.”

Sharing a short story from the Chofetz Chaim, Rabbi Malik said, “The heilege Chofetz Chaim once heard that there was someone who was going downhill in their frumkeit. The person was no longer keeping Shabbos, so the Chofetz Chaim asked to talk to him. They both went into a room and closed the door. They were talking for about 30 minutes. At the end, the man came out of the room crying profusely. He simply could not stop crying. After that meeting, the man began to keep Shabbos again be began to shteig away in his Torah learning, he started davening with more kavanah, etc.

Said Rabbi Malik: “Most people are not interested in droshos; they need genuine words from the heart to heal their wounds. As rabbis and chaplains, we have to see what the people we are counseling need, and that is what is expected from us.”

In an exceptional example of Hakaros HaTov, Rabbi Mirocznik then presented a citation of honor to the Reverend Marcos Miranda, the founder and President of the New York Chaplaincy Services and commanding officer of the NYS Chaplain Task Force. He is also the President of the Fraternal Order of Police Chaplains Lodge 777.

Another very special citation of honor was presented to HaRav HaChacham Avraham Amar, the Rabbi and chaplain of the King David Center for the last 26 years and Vice President of the Igud HaRabbonim. Prior to arriving in Brooklyn, Rabbi Amar served in the Israeli Rabbinate in the City of Beit Shemesh.

Of HaRav Amar, Rabbi Mirocznik said, “He is the voice for those who have no voice, for people who are ill and need his wise counsel. He knows how to connect to a Yiddishe neshoma. Just consider how many times he raised the spirits of the cholim at King David and elsewhere and how many lives he saved.

Rabbi Spivak said that he was extremely fortunate to work with people that made this day possible. “Rabbis Mirocznik and Schmerler are two incredibly talented people. As for Rabbi Malik,” he said with a smile, “it looks like one day he will be either a grosse Chassidshe Rav or the Governor of New York.”

With palpable emotion reverberating in his voice, Rabbi Spivak said that this particular group of musmachim were great people. “I see the way you behave, the way you think and the way you talk, and I only see the kind of greatness of distinguished rabbaonim.”

“Eighty percent of Klal Yisroel is not frum,” Rabbi Spivak ruefully observed. “Perhaps if these men here tonight had been rabbis years ago, perhaps if they had had smicha years ago, they would have saved many yidden.”
But, remembering a lesson that he has internalized over the years, Rabbi Spivak recalled the mussar he learned from Eishes Lot. “Don’t look back!” he exhorted. “Looking back is as unproductive as the pillar of salt that she became. The Roman army sowed with salt the fields of the nations they conquered so that the conquered people would have to depend on them. Salt prevent crops from growing. Salt is unproductive just as is looking back. We must look forward at all times. We must keep our eyes looking ahead.”

“I noted that Rabbi Malik was so very involved in the Chassidishe velt but that he also cares so much about the frei yidden, the 80 percent who are lost to Yiddishkeit. As Rabbi Malik said to me: Kulanu Bnai Ish Echad.”

“When Hashem asks ‘Who are we going to send?’” Rabbi Spivak stated, “we answer, ‘Hineni! Send me!’ If we are sent to Nineveh, we go to Nineveh, instead of rationalizing our fleeing to Tarshish, as did Yonah.”

Heaping well deserved plaudits on his musmachim, Rabbi Spivak said, “You are an amazing and highly talented group of people. I have tremendous kovod for all of you and I beseech the Aybeshter to send me more just like you.”

Relating his own personal experience as a patient in a hospital, Rabbi Spivak said, “As I lay there alone, I hear a voice from outside the door saying, ‘Spivak! Spivak!’ Who is it, you may ask? It was the heilege ladies from the Satmar Bikur Cholim. I asked them, how do you know who I am? They said they saw on the door that I had a Yiddishe name. They did not care if I was frum or not frum, if I was a Litvack or a Chossid. They asked what I would like to eat and they offered me a whole list of foods. They would do this for every Jew, irrespective of background or affiliation. And these women take care of 18 hospitals every single day.”

He said that this was the lesson to be drawn from receiving smicha from AA. “It is one for all, and all for one. I know what it meant for me and I will never forget it.”

He told the musmachim and their families, “There are no atheists in foxholes or ICU units.”

“It is not only that I am giving you smicha tonight, but it is also that you are giving me your pledge that you will be going out to your brothers and sisters in need,” he concluded.

Calling each musmach by name and offering a brief description of their background, Rabbi Spivak handed out the diplomas to each graduate with a great deal of pride.

The evening concluded with class photos and the davening of maariv.

Said one musmach, who chose to remain anonymous: “I think I speak for all my fellow musmchim, when I say that we are ever so grateful to Hashem Yisborach for guiding our footsteps to the door of Kollel Ayshel Avraham. Meeting with and learning with Rabbi Spivak and all the other rabbonim has changed our lives forever. We now go out in to the world to make a real difference for Klal Yisroel and for that opportunity we are the fortunate ones.” 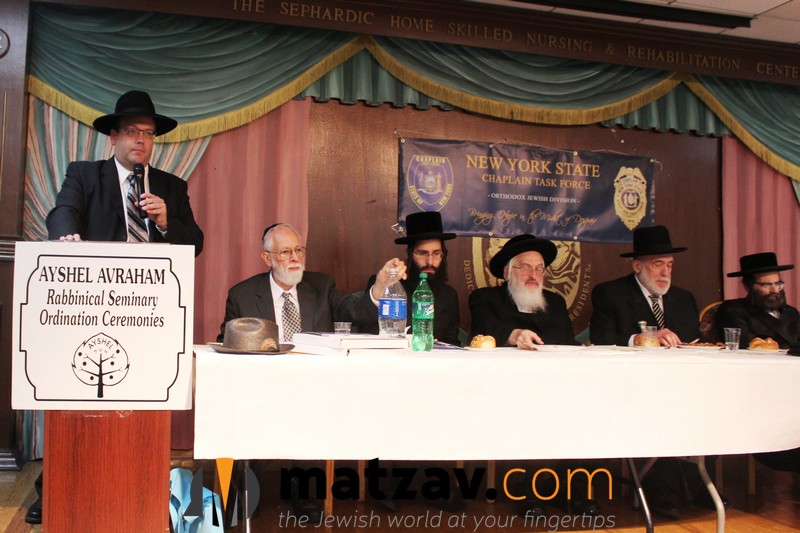 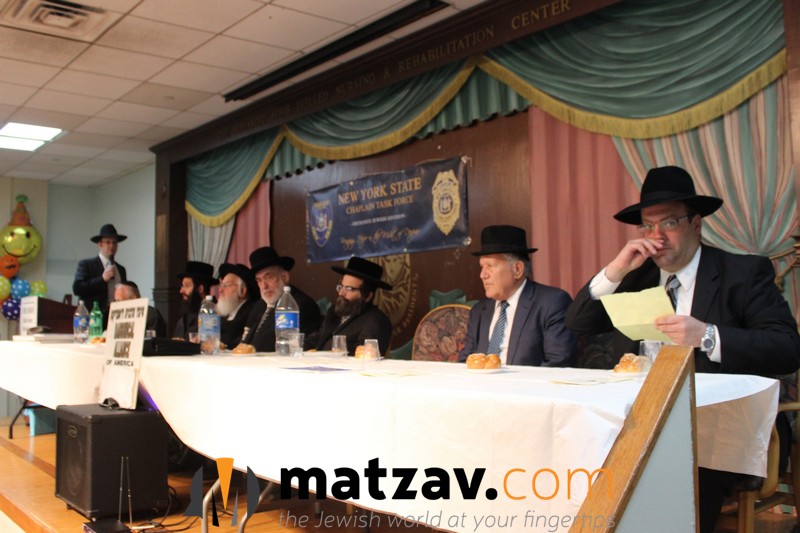 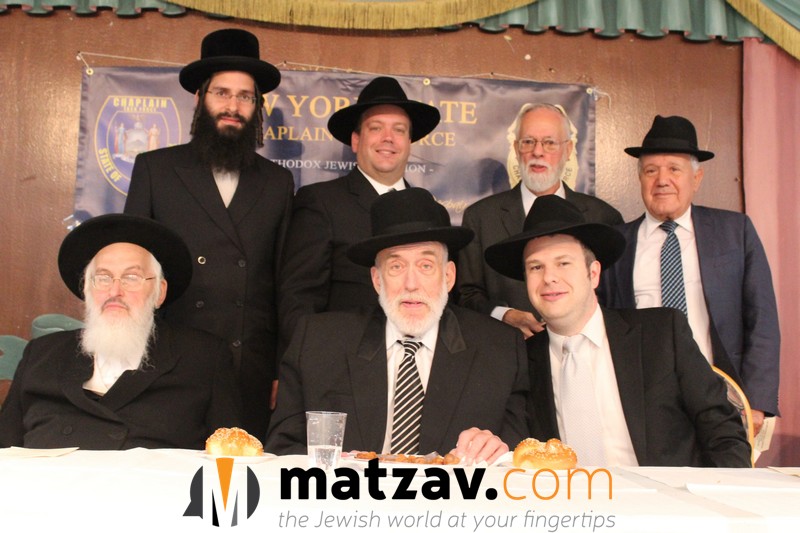 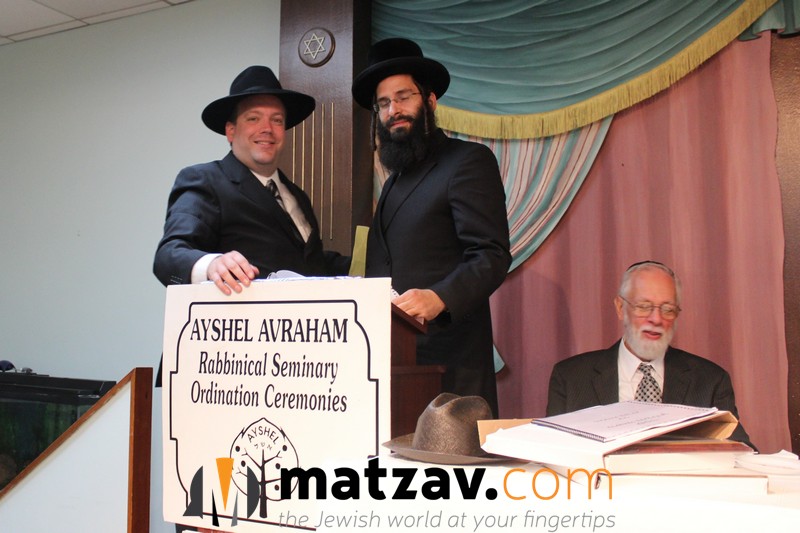 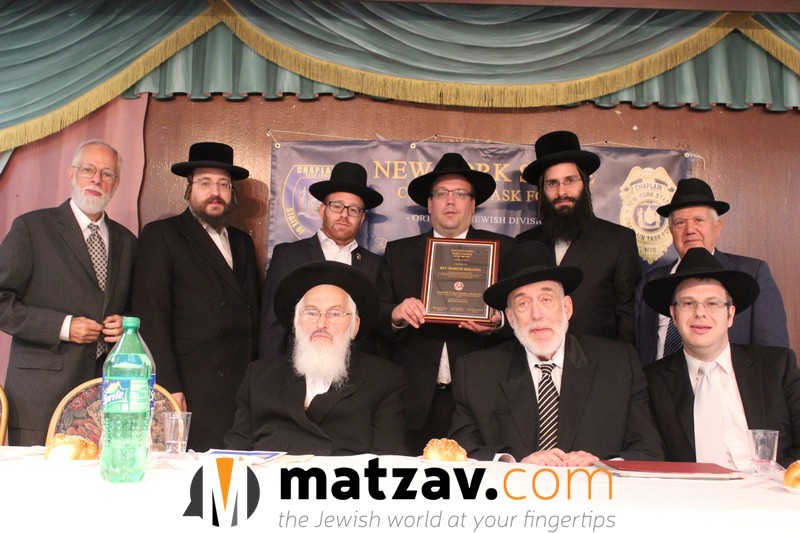 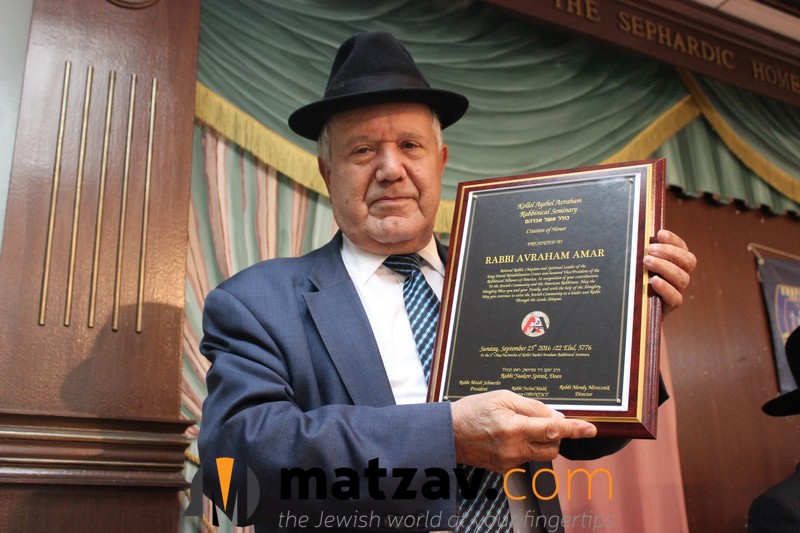 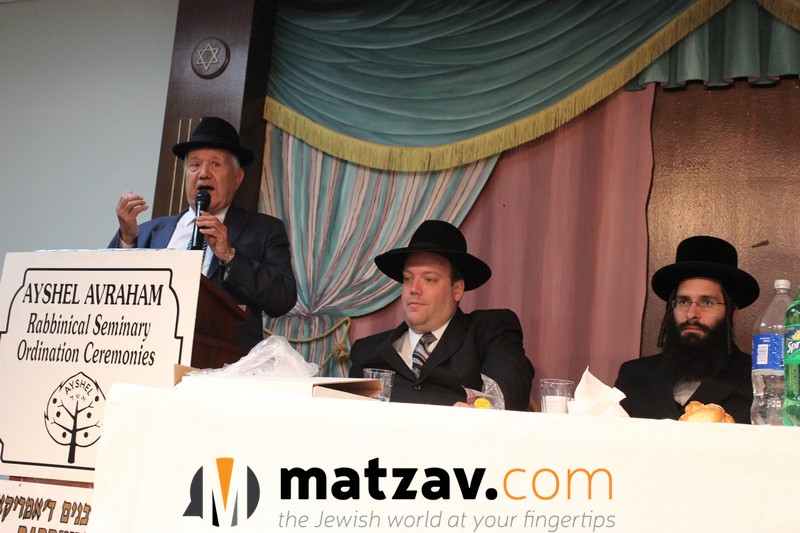 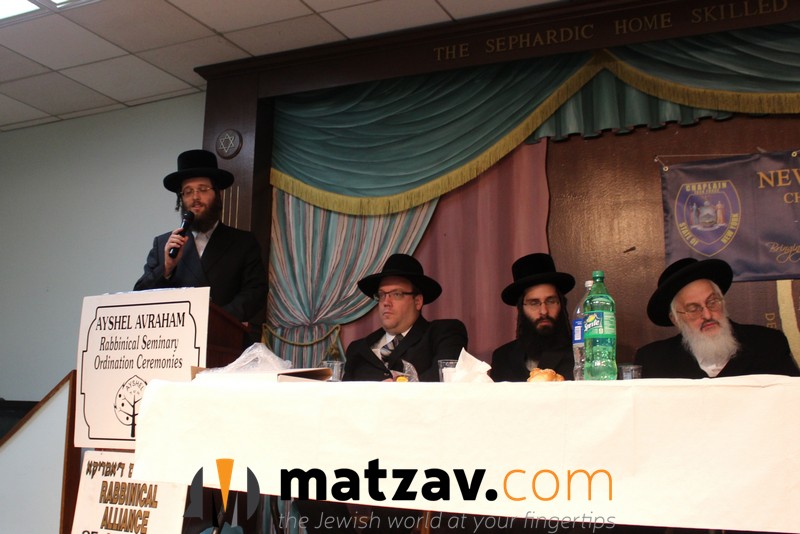 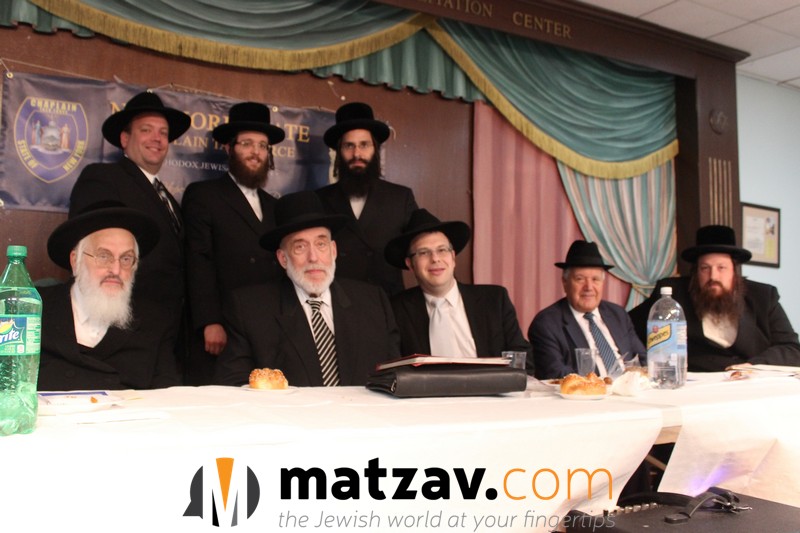 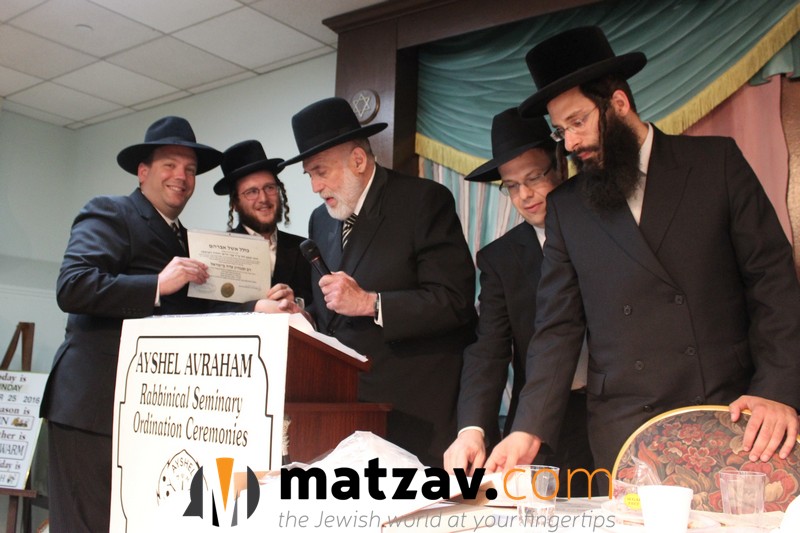 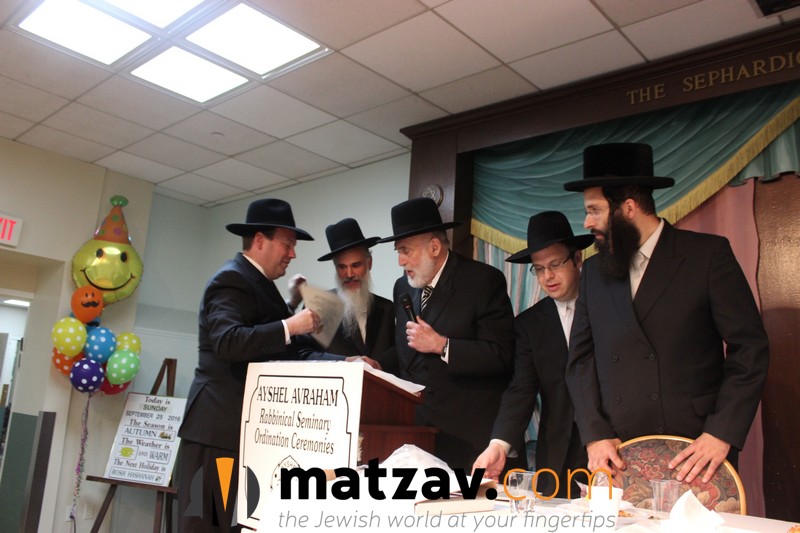 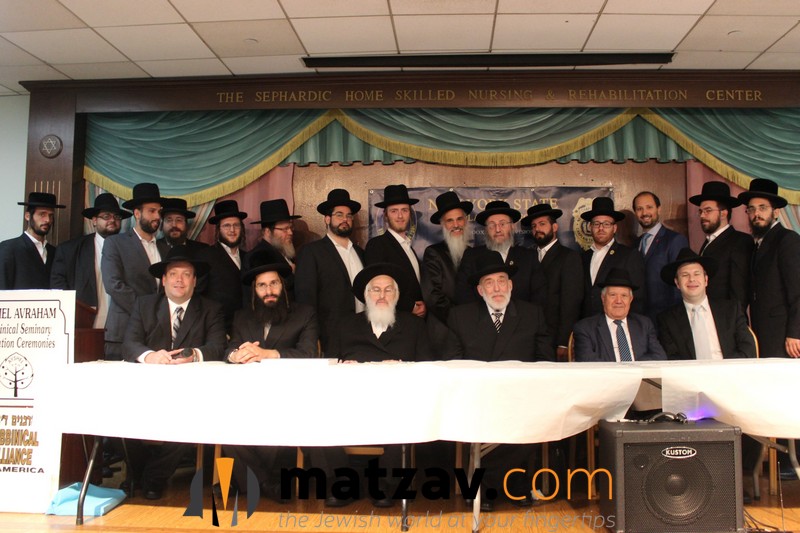