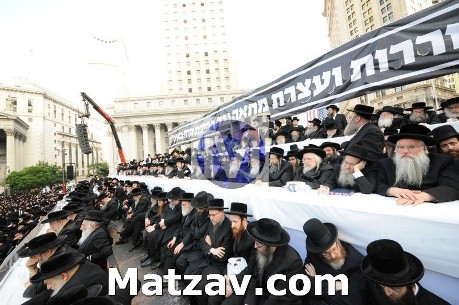 [Photos below.] Thousands of men and boys gathered this afternoon at Foley Square in Manhattan to protest against efforts to draft chareidim in Israel into the IDF.

A committee in the Knesset agreed on draft legislation last week that sets quotas for the number of chareidi men expected to join the military and raises the possibility of criminal penalties for those who don’t cooperate. The current effort seeks to end a status quo that has been in place for some 65 years.

Today’s program began Minchah, followed by the recital of Tehillim led by Rav Ohser Kalmanowitz, rosh yeshiva of the Mirrer Yeshiva in Brooklyn.  Rav Yitzchok Glick of the Hisachdus Harabbonim was the chairman of the program.

Rav Naftoli Herzka Frankel of the Badatz of the Eidah Hachareidis led the recital of Kabbolas Ohl Malchus Shomayim.

Police estimate that over 65,000 people participated in the event.