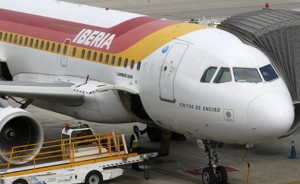 Passengers on Iberia Airline’s flight 3316 from Madrid to Tel-Aviv were surprised to hear the captain’s announcement just a few minutes before landing: “We will soon be landing in Tel-Aviv which is in the state of Palestine,” the captain declared.

Lior, a passenger on Iberia flight 3316 told Channel 2 news that he was shocked by the announcement.

“The entire flight immediately started whispering. We live in Israel and I don’t understand why he wouldn’t say the name if our country. He had purposely said it in English so we would understand. It was deliberate – especially during these tense days Israel is going through.” Another passenger added: “It is not acceptable, everyone noticed it.”

Leave a Reply to To #3 disgusted Cancel reply