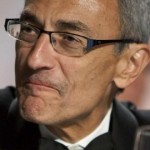 Podesta said that the president was committed to using executive orders to pass regulations under the Clean Air Act to limit carbon dioxide emissions that they say cause global warming.

“They may try, but there are no takers at this end of Pennsylvania Avenue,” Podesta told reporters at a Monday press conference at the White House.

Republicans and some Democrats in Congress have urged the Obama administration to scale back their climate goals because of the adverse impact of new regulations on the coal industry. Coal supporters have portrayed the administration’s actions as the “war on coal” due to huge job losses in coal states like Kentucky and West Virginia.

“We’re getting the living….beaten out of us,” West Virginia Democratic Sen. Joe Manchin told President Obama’s nominee to be the country’s top energy regulator last year. “There has been nothing more beat up than coal.”

“They just beat the living daylights out of little West Virginia, but they sure like what we produce,” Manchin told former nominee Ron Binz. “We could do it a lot better if we had a government working with us as a partner.”

Read more at the Daily Caller.