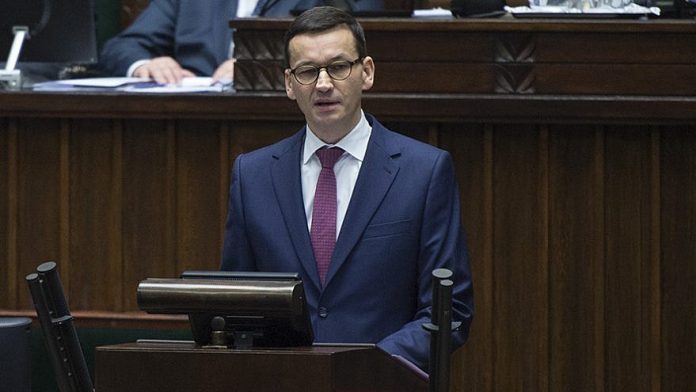 Poland abruptly canceled a visit by Israeli officials amid concern that talks would focus on the unsettled issue of Jewish property restitution.

The escalation comes amid thorny relations between Poland and Israel about historic issues, mainly the role that Poles played during the Holocaust. Polish Prime Minister Mateusz Morawiecki scrapped a trip to Jerusalem in February after Israeli Premier Benjamin Netanyahu reportedly said the Polish nation cooperated with German Nazi occupiers during World War II.

Monday’s cancellation comes two days after a march by thousands of Polish nationalists who demanded Poland pay no compensation to Jews or anyone else whose properties were confiscated by the Nazis and later by the Communists. Poland is the only ex-communist nation without comprehensive legislation addressing property claims.

“Poland decided to cancel the visit of Israeli officials after the Israeli side made last-minute changes in the composition of the delegation suggesting that the talks would primarily focus on the issues related to property restitution,” the Foreign Ministry said in a statement Monday.

Avi Cohen-Scali, the director general of the Israeli Social Equality Ministry, was supposed to head the Israeli delegation, it said. Israel’s Foreign Ministry declined to comment.

Poland’s ruling Law & Justice Party ignited outrage last year with a law criminalizing any suggestion that the country was responsible for the mass murder of Jews during World War II. The legislation angered Israel, which saw it as an “attempt to challenge the historical truth” and muzzle elderly Jews who survived the Shoah from sharing their stories.

After Secretary of State Mike Pompeo urged Poland to move forward with property restitution laws in February, the issue became a lightning rod for far-right groups, who are campaigning ahead of this month’s European Parliament elections.

To prevent the radical right from wooing away the ruling party’s conservative electorate, Morawiecki vowed on Saturday that Poland will reject compensation demands as its citizens were victims of atrocities from German occupants and “cannot bear any responsibility.”

At Saturday’s nationalist march, activist Robert Bakiewicz said that about $300 billion worth of real estate, whose owners died in the war, may be at stake. Protesters gathered in the Polish capital, a city razed to the ground by the occupying Nazis during World War II, chanting “No to claims!” and “This is Poland, not Polin!” in reference to the Hebrew word for the country.

Poland is keen to avoid a battle over restitution with Washington as it seeks to boost the U.S. military presence on its soil as a deterrent against potential threats from Russia. The Polish government has said that potential claims are void after the country’s communist authorities paid the U.S. $40 million in 1960 to provide indemnity to claims by U.S. citizens for property seized in Poland.