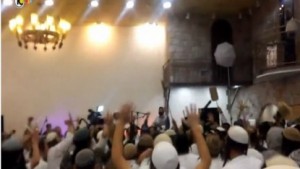 Two people were arrested Tuesday in connection with the “wedding of hate” where right-wing activists were filmed celebrating the Duma firebombing attack that killed three members of a Palestinian family, police said.

Initial reports suggested one suspect was brought in for questioning, but a police spokesperson told The Times of Israel that a second person was also picked up for involvement in the event, in which wedding-goers danced with guns, knives and a mock Molotov cocktail.

Footage released last week showed dozens of young Israeli right-wing extremists, said to be linked to the suspected perpetrators of the Dawabsha family murder, celebrating the killing at the wedding of other activists. The images in the clip sparked wide condemnation.

The video, aired by Channel 10, also showed revelers holding a photo of baby Ali Dawabsha, who was burned to death in the July 31 firebombing, and repeatedly stabbing the picture.

One of the suspects arrested Tuesday is a resident of the West Bank settlement of Tapuach, Israeli reports said. The investigation is ongoing, police said.

The groom, who is reportedly friends with the Jewish extremists detained in connection with the firebombing attack, said Thursday he was unaware of the celebrations of the murder at his wedding.

He called the footage “shocking,” but insisted that “there were about 600 people at my wedding, and this wasn’t something I agreed to. There were a million people. I don’t control what happens at my wedding. I’m just the groom; I didn’t even pay for the photographer or the singer.” Read more at Times of Israel.