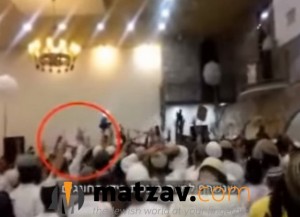 The Judea and Samaria district police said on Thursday it opened an investigation into a video shot at a wedding which shows Jewish radicals stabbing a photograph of the Palestinian toddler who was killed in the Duma firebomb attack, Haaretz reports.

A statement said the inquiry commenced a few days ago.

The police said they were looking into the “numerous and serious offenses seen in the video,” including those who were careless with their weapons. The police intends to question those responsible and to revoke their gun licenses.

The video shows youths at a Yerushalayim wedding singing songs of revenge and dancing with guns and knives. One masked youth holds up a firebomb, while another is seen stabbing a photo of Ali Dawabsheh, the toddler killed along with his parents in the West Bank arson attack earlier this year.