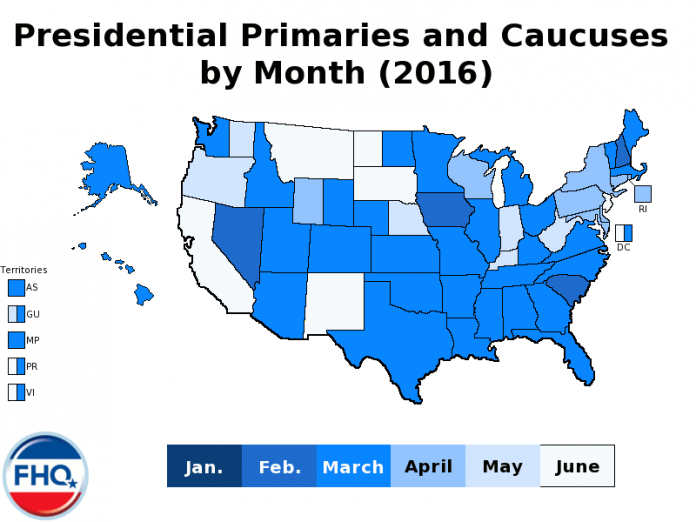 Hillary Clinton has a clear but narrowing lead over Bernie Sanders three weeks before Maryland’s Democratic primary, according to a new Washington Post-University of Maryland poll.

The poll also has good news for Donald Trump, who has a slight edge among likely Republican voters, with Ohio Gov. John Kasich in second place.

In a general-election matchup, Clinton wallops Trump by 35 percentage points among registered voters, wider than President Obama’s winning margins in the reliably blue state in 2008 and 2012.

Maryland – which holds its primary April 26, along with Pennsylvania, Rhode Island, Delaware and Connecticut – so far has received little attention from the 2016 hopefuls. But Clinton will visit Baltimore on Sunday, for a “grass-roots organizing event.”

In the Democratic contest, the state’s 95 delegates will be awarded proportionately. The statewide Republican winner will receive 14 of 38 delegates, with the remaining 24 delegates awarded in sets of three to the winner of each of Maryland’s eight congressional districts.

The poll shows Clinton leading Sanders 55 percent to 40 percent among likely Democratic voters. Clinton’s advantage is half what it was last month in a Baltimore Sun poll, which showed her up roughly 30 percentage points. Last fall, a Washington Post-University of Maryland poll of Democratic voters found Clinton leading Vice President Biden (never a declared candidate) by 17 points and Sanders by 23 in a six-person field.

Maryland is seen as a Clinton stronghold because of its proximity to Washington and because more than one-third of the Democratic electorate is African American, a group that has heavily favored the former secretary of state this year.

Even while former Maryland governor Martin O’Malley was seeking the Democratic nomination, his support stayed in the low single digits, and scores of Maryland officeholders across the state endorsed Clinton.

She leads Sanders among black voters 63 percent to 33 percent, according to this week’s poll, and among women 60 percent to 35 percent. Clinton has even larger advantages among moderate and conservative Democrats (63 percent to 30 percent) and voters 50 and older (66 percent to 26 percent).

Hermione Nickens, a Prince George’s County teacher who decades ago voted for Ronald Reagan, said she thinks Sanders is too old to be president at 74.

Nickens, 56, says she’s disgusted by Republican rhetoric that has left immigrant students in her high school class feeling ostracized and afraid of deportation. She thinks that Clinton, 68, has the best record in the field.

“No one has the experience on the global front that Hillary has,” said Nickens, who is African American.

Mirroring many primaries held so far, Sanders performs best among those who are younger, leading Clinton with voters under age 40 by a margin of 61 percent to 38 percent. Sanders runs roughly even with Clinton among white Democratic voters, 46 percent to 47 percent. The senator from Vermont, a self-described Democratic socialist, leaned on a winning margin among whites in each of his four state victories where exit polls were conducted.

On the Republican side, Trump has a slight edge among likely voters, garnering 41 percent of their support, compared with Kasich’s 31 percent and Ted Cruz’s 22 percent. Although the 10-point margin bodes well for Trump, it is not statistically significant given the survey’s sample size of 283 likely Republican voters.

Kasich, who has won only his home state, has been banking on a strong showing in Northeastern states to show that he is a serious candidate. He leads among Maryland college graduates with 43 percent, ahead of Trump’s 28 percent and Cruz’s 23 percent. In 2012, 56 percent of Maryland’s GOP primary voters had college degrees, one of the highest shares in the nation.

Trump is buoyed by Republicans without college degrees, leading with 51 percent in this group, compared with Kasich’s 22 percent and Cruz’s 21 percent.

Kasich’s record on balancing the federal budget as a congressman appeals to John Cirelli, a property manager in Anne Arundel County.

“He’s not off the wall. He’s not crazy like Trump, who doesn’t think before he speaks,” said Cirelli, 61. “He’s more of a statesman.”

Colette Delwiche, 61, says she thought Trump was joking when he first announced his presidential bid. But the former office manager from Charles County is backing the Manhattan billionaire as a way of expressing her disgust with national politics. She says she’s been disillusioned by watching her 10 children grow up apathetic about their government.

“I figured he can’t do any worse than Obama,” Delwiche said of Trump. “What a disaster for our country has that been. The world thinks we are a joke.”

Maryland Gov. Larry Hogan (R), whose approval ratings are soaring, has said he does not think Trump should be the party’s nominee. But he has declined to endorse any other candidate since New Jersey Gov. Chris Christie, a close friend, dropped out of the race. Among Republican voters, those who strongly approve of Hogan’s performance are slightly less supportive of Trump than GOP voters are overall.

Republican disaffection with Trump is one reason for Clinton’s 63 percent to 28 percent showing over the GOP front-runner in a head-to-head matchup. By comparison, Obama beat GOP nominee Mitt Romney by 26 points in Maryland in 2012.

Just over 7 in 10 registered Republicans (72 percent) say they would support Trump over Clinton in such a contest, while 87 percent of Democrats – who outnumber Republicans in the state more than 2 to 1 – would support Clinton. Clinton also leads 59 percent to 27 percent among political independents.

The Washington Post- University of Maryland poll was conducted March 30 to April 3 among a random sample of 1,503 Maryland adults on landline and cellular phones, conducted in partnership with U-Md.’s Center for American Politics and Citizenship. Results among the sample of 539 Democratic likely voters have a margin of sampling error of plus or minus 5.5 percentage points; the error margin among 283 Republican likely voters is 7.5 percentage points.