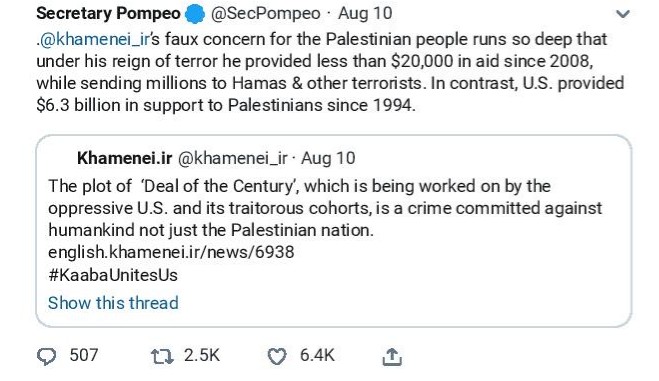 “It’s sick that on the eve of #TishaBAv—a solemn day for the Jewish people—[Khamenei] calls for violence against the Jewish state,” Pompeo wrote on Twitter.

Amid reports that Israel could participate in a joint coalition to safeguard vessels in the Persian Gulf that includes the United States and the United Kingdom, Khamenei told Muslim hajj pilgrims on Saturday that “the trick called the ‘deal of the century,’ which is being pushed by an oppressive America and its traitorous companions, is a crime against humanity, and not just the Palestinian people. We call upon everyone to take an active part in defeating this deceit by the enemy.”

The hajj is the annual Muslim pilgrimage to Mecca in Saudi Arabia.

Pompeo also took issue with the Iranian leader positioning Iran as a champion of the Palestinians.

Khamenei’s “faux concern for the Palestinian people runs so deep,” wrote Pompeo, “that under his reign of terror he provided less than $20,000 in aid since 2008, while sending millions to Hamas & other terrorists. In contrast, [the] US provided $6.3 billion in support to Palestinians since 1994.

“[Khamenei] doesn’t see ‘progress’ as prosperity for the Palestinian people, but [as] Palestinian terrorists switching from rocks to rockets to kill more Jews. The Iranian people don’t want this; they deserve leadership behaviors that reflect their greatness.”