Secretary of State Mike Pompeo, German Foreign Minister Heiko Maas and Jewish Agency chairman Isaac Herzog attended a Thursday-night memorial service at the synagogue in Halle, Germany, which one month ago was the target of an anti-Semitic attack on Yom Kippur.

Unable to enter the synagogue thanks to recently installed security cameras, doors and locks sponsored by the Jewish Agency’s Security Assistance Fund and the Helmsley Charitable Trust, the attacker killed two non-Jewish passersby in the vicinity as 60 worshippers were on lockdown in the synagogue for five hours.

“What happened here was tragic,” said Pompeo. “The world recognized that; [U.S.] President [Donald] Trump recognized that and has put a major focus on stamping out anti-Semitism wherever we find it, and in supporting the Jewish people and Israel in every way we can,” he said.

“I wanted to come here, share America’s sympathy for what took place and remind the world that anti-Semitism is not just limited to certain places. You can find it everywhere, you can find it in our places,” he continued. “The world must work together against this threat and this vicious attack against religious freedom, and in particular, religious freedom of the Jewish people.”

Herzog stated at the service that “there is no question as to the rampant rise of anti-Semitism across Europe. It’s truly a miracle that the Jews of Halle didn’t suffer a massacre on Yom Kippur. Global leaders must unite in a relentless fight against anti-Semitism—by protecting Jewish institutions, and most importantly, by means of education and firm legislation against hate crimes.”

Herzog’s visit to Germany comes on the heels of the Jewish Agency Board of Governors meeting held last week in Jerusalem, where a new strategic plan for the next decade was adopted, addressing the greatest challenges currently facing the Jewish people, including the fight against the rising tide of anti-Semitism.

In addition to participating in the memorial service inside the synagogue, the officials laid a wreath near a kebab restaurant where the one of the passersby was killed.

At a meeting earlier on Thursday evening with Jewish leaders in Halle, Jewish Federations of North America President and CEO Eric Fingerhut related that one year since the most deadly anti-Semitic attack in the history of the United States in Pittsburgh, and then another attack in San Diego, “this experience resonates with us deeply.”

“Perhaps we are behind our European partners in securing Jewish facilities,” he said, expressing his hope to learn from Halle “to secure Jewish communities in North America.”

Also in attendance at the synagogue ceremony were survivors of the Halle attack, who were praying the Yom Kippur Torah service when they heard gunshots from outside. Thanks to security cameras installed at the synagogue, the security guard spotted the armed terrorist and alerted the worshippers, who then barricaded themselves in.

‘The most powerful service we ever experience’

Jewish Agency Berlin regional director Anastasia Pletoukhina went to spend a quiet Yom Kippur in Halle with her husband, Valentin Lutset, to support and bring “more energy, spirit and singing” to the 600-member community at their prayer service, she told JNS.

She recalled after hearing gunshots, “people didn’t believe what was happening at first. I never considered this kind of attack in Germany.”

Yet she noted that since Israel’s “Operation Protective Edge” campaign in 2014 against Hamas in Gaza, she noticed that anti-Semitism began to become more vocal with demonstrators yelling, “Hamas, Hamas, Juden ins Gas” (“Jews into the gas”)!

According to Pletoukhina, after German police arrived at the synagogue in Halle and put the community under lockdown, her husband suggested that they continue praying the Yom Kippur service, which turned out to be “the most powerful service we ever experienced, praying for our lives, not only theoretically.”

The synagogue building under attack originally served as the town’s Jewish funeral home, but in 1948 was converted into a synagogue, replacing Halle’s original synagogue that was burned on Kristallnacht (“The Night of Broken Glass”), the massive pogrom carried out against Jews on Nov. 9-10, 1938.

In addition to being one month since the Halle attack, this weekend marks 81 years since that night in which hundreds of Jews were killed, and thousands of synagogues, Jewish businesses and homes destroyed. 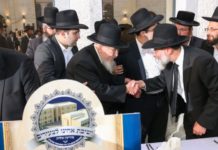 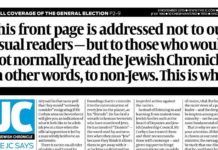