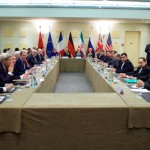 Pope Francis endorsed the Iran nuclear deal while addressing the United Nations General Assembly in New York on Friday. Francis called it “proof of political goodwill” and said he hopes it will be “lasting and efficacious.”

The pope also called for a ban on nuclear weapons, and addressed the need to combat climate change.

Francis warned “Any harm done to the environment is, therefore, harm to humanity” and chastised a “culture of waste.”

Afterward, the pontiff will head downtown to lead a multi-faith prayer service at the 9/11 Memorial, followed by a processional through Central Park.

The pope will then depart New York for Philadelphia, where he will spend the weekend at the World Meeting of Families. Read more at NBC News.