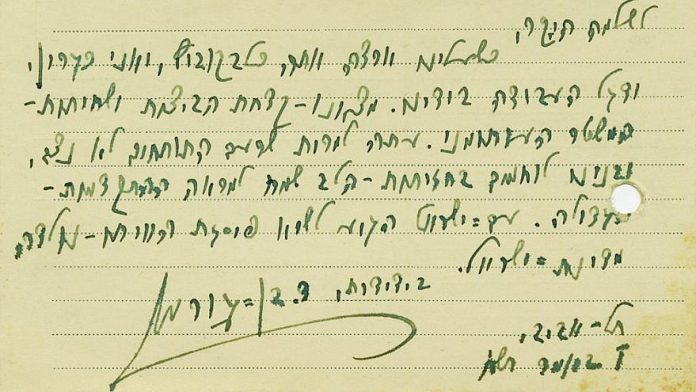 A postcard written and signed by Israel’s first prime minister, David Ben-Gurion, just one day after officially declaring the State of Israel’s independence, was recently discovered. Dated on the sixth day of the Hebrew month of Iyar in the Jewish year 5748 (May 15, 1948), it was sent to the founding father of the kibbutz movement, Shlomo Lavi.

In a letter inscribed on the back of the postcard, Ben-Gurion wrote: “The people of Israel have attained the pinnacle of their existence—the State of Israel has been born.”

The postcard, which was discovered right before Israel’s Independence Day, will be put up for public auction next week at the Kedem Auction House in Jerusalem.

In the letter, Ben-Gurion compares the contrasting realities on the ground between the time he immigrated and the day after the establishment of the State of Israel.

“When we arrived in this Land, you as Lefkowitz and I as Grün, waving the flag of Labor, we encountered the malaria of the swamps and the corruption of the Ottoman regime. Now, despite the fact that the roar of the cannons has not ceased and our sons are fighting on all fronts, my heart is joyous upon witnessing this great advancement.”

Ben-Gurion (formerly Grün, 1886-1973), who was born in Płońsk, Poland, served as both prime minister and minister of defense in the first national government, and as leader of the Labor Party in succeeding governments. He was among the founders of the Histadrut (General Organization of Workers in Israel) and the first leader of the Yishuv (Jewish community in mandatory Palestine).

The letter recipient, Shlomo Lavi (formerly Lefkowitz, 1882-1963), was also born in Płońsk. He was also an active member of the Ezra Zionist Youth Movement, which sought to provide free Hebrew education to poor children, and was founded by Ben-Gurion and Shlomo Tzemach.

Lavi immigrated to the region of Palestine under the Ottoman Empire in 1905, during the period of the Second Aliyah. He then worked in several different positions, including at the orchards of Petach Tikvah and Sejera, at an oil-production plant owned by the Atid company and on the Kinneret agricultural farms. He was one of the founders of the Jewish defense and paramilitary organization of Hashomer. As a member of the communal Kvutzat Kinneret community in the Galilee region, he introduced the concept of the “Kvutzah Hagedolah” (the kibbutz). In 1921, Lavi and several other individuals founded Kibbutz Ein Harod.

Meron Eren, co-owner of Kedem Auction House, said: “This postcard is a very special find that encompasses a supreme historic value. Above all, it carries with it nostalgia for the early days of the country, sentiments of renewal, excitement upon a state in the making, and the exhilaration and joy of a generation that took nothing for granted.”

The revelation of the postcard also overlapped with the discovery of a collection of 26 photographs that captured scenes that transpired among Arab belligerent forces during Israel’s War of Independence. The photos will likewise be put up for public auction next week at the Kedem Auction House.