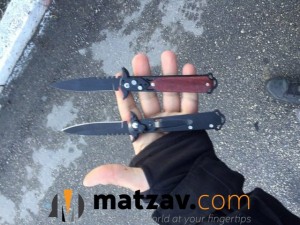 [Update below.] Shortly after 7 p.m. this evening, officials at the Yerushalayim Police issued a statement saying that a special patrol unit of the Police apprehended two Arab minors, aged 12 and 13, armed with knives.

The two boys were spotted walking around one of Yerushalayim’s main roads and according to the Police report, aroused the suspicion of civilians as well as patrolling policemen nearby.

UPDATE The boys were caught with switchblades at the junction of Hachomah Hashlishis and Cheil Hahandasa.

Officers approached the pair and saw they had their hands in their pockets. A quick search uncovered the knives, and the two suspects were taken away for questioning.

The two children are from East Jerusalem, Army Radio said.