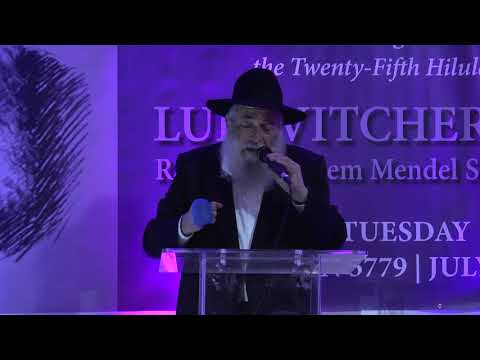 Rabbi Yisroel Goldstein, whose life was miraculously saved in the anti-Semitic shooting attack on his Chabad center of Poway, California, was the guest speaker at a special event commemorating the 25th yahrtzeit of the Lubavitcher Rebbe and share a request he made of President Trump during a private meeting with him.

“I took out a photo of the Rebbe and told the president, ‘This is my inspiration. This is the one who sent me to Poway and sent thousands of emissaries around the world,” Rabbi Goldstein said.

Rabbi Goldstein then continued, “Mr. President, I need one favor from you: Can you please call President Putin from Russia and ask him to release the Schneerson Library that is sitting there since the Holocaust? What better gift can you do for me, my community and all Chabad chassidim if you were to pick up the phone and call him?”

The library is an estimated 10,000 volumes of rare Jewish books and manuscripts that were collected by Chabad Rebbes and held in the Russian State Library after World War II. Russia has claimed it to be a national treasure, despite a US federal judge ruling in favor of its return to the Chabad movement.

Rabbi Goldstein said President Trump listened to his unique request and responded: “Rabbi, give me the information and I’ll do what I can do.”