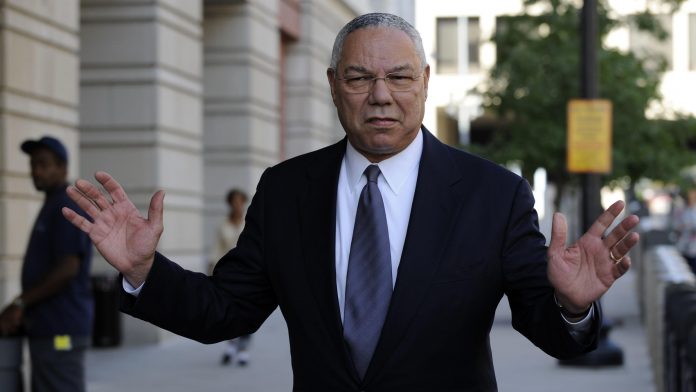 Former US Secretary of State Colin Powell told a colleague last year that Israel has a slew of nuclear weapons pointed at Iran, according to emails released by hacking group DCLeaks and reported on by US foreign policy blog LobeLog on Wednesday.

In a March 2015 exchange between America’s former top diplomat and his current business partner, Jeffrey Leeds — about Israeli Prime Minister Benjamin Netanyahu’s controversial speech to Congress to warn against the Iran nuclear deal that was being negotiated — Powell wrote:

Negotiators can’t get what he wants. Anyway, Iranians can’t use one [a nuclear weapon] if they finally make one. The boys in Tehran know Israel has 200, all targeted on Tehran, and we have thousands. As Akmdinijad (sic) [said], “What would we do with one, polish it?” I have spoken publicly about both nK and Iran. We’ll blow up the only thing they care about—regime survival. Where, how would they even test one?

This assertion about the existence of Israeli nukes, as LobeLog‘s Eli Clifton pointed out, is significant, because Jerusalem continues to maintain a policy of “nuclear ambiguity.”

Powell, who publicly endorsed the Iran deal a few months later, during an interview onNBC‘s “Meet the Press,” wrote a subsequent email to Leeds saying,

They [the Iranians] say, correctly, that they have every right to enrich [uranium] for energy. Russians helped build a power reactor at Busher. Can’t get enough sanctions to break them Lots of bs around about their progress. Bibi likes to say “a year away,” as do our intel guys.They say it every year. [It] ain’t that easy to do.

In another email exchange, this one in August 2015 with President Ronald Reagan’s former chief of staff Ken Duberstein, who – as Clifton explained, “suggested that Powell might refrain from endorsing the deal in a television interview where he would face questions about Hillary Clinton’s emails.” But Powell was undeterred, and harshly criticized Council on Foreign Relations President Richard Haass and Ret. General David Petraeus for remaining on the fence about the nuclear agreement:

The Iran deal is a good one for the country and our alliances. Retired generals and admirals popping off. I have studied it pretty thoroughly…I have done emails before on tv. Have to deal with ISIS. Richard] Haass, Petraeus et all claiming to be undecided. BS, they are just protecting their future options. I don’t have or want any. [James] Baker, [George] Shultz know what’s right, as does Henry [Kissinger]. Brent [Scowcroft] showed some guts.

Duberstein later forwarded Powell a fundraising email sent out by former US Ambassador to the UN John Bolton, which called the nuclear deal “the single largest global security crisis.”

“Haha! What is he smoking?” Duberstein wrote.

According to a report in the Washington Post, the shady site that posted Powell’s two years’ worth of emails — in which he mocked and hurled epithets at Donald Trump, Hillary Clinton, Dick Cheney and others — is being linked to the Russian government. The FBI, the report said, is investigating the veracity of this suspicion.

Powell is a retired four-star general in the US Army, who served as as Chairman of the Joint Chiefs of Staff (1989-1993) during the Gulf War. He served as secretary of state under President George W. Bush from 2001 to 2005.