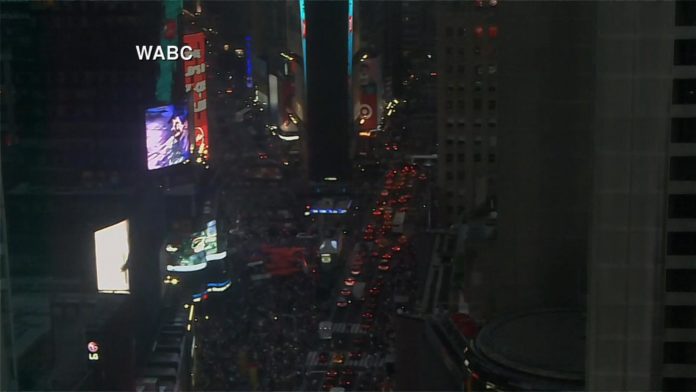 A widespread power outage in the heart of Manhattan today shut down some of the city’s subways as iconic parts of midtown, including Times Square and Rockefeller Center, went dark.

Con Edison said it was working to restore power to 42,000 customers, mostly on the west side of Manhattan. The utility did not immediately respond to phone messages, and it was unclear when they expected power to return.

Saturday’s outage took place on the anniversary of a 1977 New York City outage in which most of the city lost power. The city was also part of massive power outage in 2003.

Mayor Bill de Blasio, who was campaigning for president in Iowa on Saturday, tweeted that the police and fire departments and other city agencies were working to respond a manhole fire that caused the outage. The New York City Council speaker, Corey Johnson, said on Twitter that there was a major disturbance at Con Edison’s 49th Street substation, and that the utility was working to fix it.

New York’s Metropolitan Transportation Authority tweeted that there were outages at underground stations that were limiting transportation from the Bronx, Brooklyn and Queens into Manhattan.

The New York Fire Department said that the loss of power was from Fifth Avenue to the Hudson River, and from 72 Street to the West 40s.