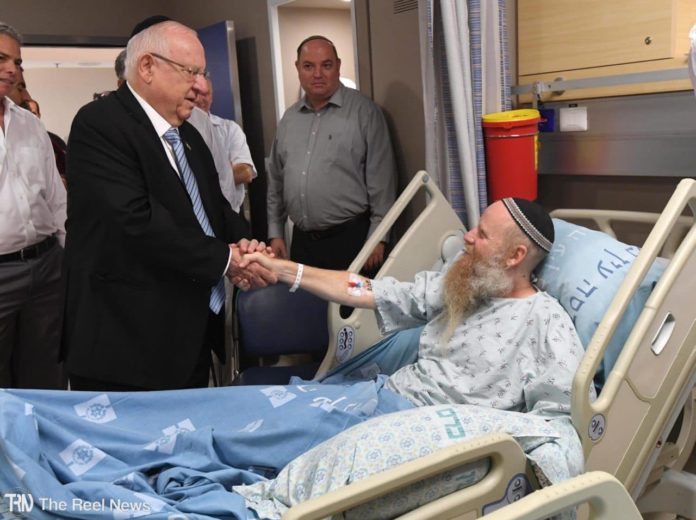 >>Follow Matzav On Whatsapp!<<
President Rivlin paid a condolence visit to the Shnerb family at Hadassah Ein Kerem Hospital after the murder of family member Rena Zel in a terror attack near Dolev on Friday, August 23rd.
He said “Your spirit and abilities, Rabbi Eitan, strengthen us. We cry but we also get up. It is most important for us to continue choose life and stay strong “
He was visiting the father of the family, Rabbi Eitan Shnerb who was wounded in the attack, and his son Dvir, who was more severely injure; both in the same room now. Near their bed were many close family members and friends who came to strengthen Eitan and Dvir and Tamar, the additional daughter of the Rabbi who was staying with them in the room.
“Renna was very upset about the time we spend on cellphones,” Renna’s sister Tamar told the President and shared the family’s initiative in her memory. “On Friday, my mom asked everyone to disconnect from their phone for her, to do something meaningful with our time.”
From there, the president continued to visit Nahum Nevis, who was severely wounded alongside his sister Noam, who was also wounded, in the overhaul attack that occurred Friday, Tu Bab, on August 16.
{Matzav.com}