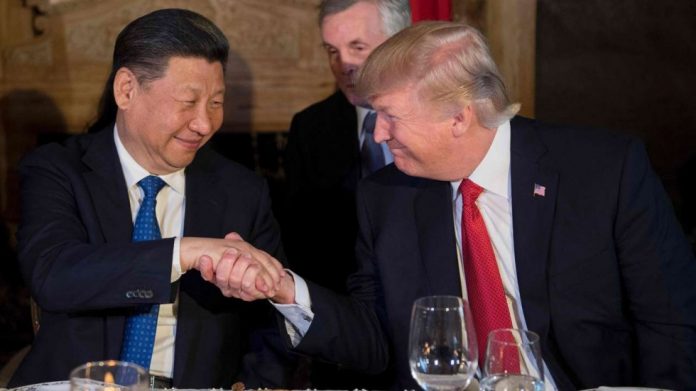 The trade war between the United States and China worsened Friday as Beijing imposed retaliatory tariffs on $75 billion in American goods and President Trump took the extraordinary step of calling on U.S. companies to stop doing business with China.

The new tariffs, which included reinstated levies on auto products, delivered a strategically timed blow as recession warning signs cast doubt on the strength of the U.S. economy.

Trump initially directed his ire at Federal Reserve Chair Jerome Powell in Friday tweets, painting the Fed’s lack of monetary easing as a greater threat to American workers and businesses. But moments later he said he would be responding to China’s tariffs later Friday and demanded American companies cut ties with China.

“Our great American companies are hereby ordered to immediately start looking for an alternative to China, including bringing your companies HOME and making your products in the USA,” Trump tweeted.

The White House does not have the authority to force companies to follow such directives, but his comments came in the middle of a Twitter tirade in which he appeared to be expressing mounting fury that his economic agenda is not coming together.

Trump huddled with his economic advisers Friday afternoon, according to a person with direct knowledge of the meeting who was not authorized to speak publicly. Treasury Secretary Steven Mnuchin, who is on his way back from vacation, called in for the Oval Office meeting, which included the president’s trade team, a senior administration official said.

“I have no idea how the president thinks he can order companies to stop working with China. I’m baffled,” said Brian Riedl, a budget expert at the Manhattan Institute, a conservative think tank.

The move came under sharp and immediate criticism from the U.S. business community, which warned that halting sales with such a large trading partner would hurt American companies and the broader economy.

“Trump may be frustrated with China, but the answer isn’t for U.S. companies to ignore a market with 1.4 billion consumers,” said Myron Brilliant, executive vice president at the U.S. Chamber of Commerce. “Escalating tensions is not good for market stability, investor confidence or American jobs.”

The National Retail Federation also said in a statement that “it is unrealistic for American retailers to move out of the world’s second largest economy.”

While dozens of major companies including Google and Nintendo have already shifted supply chains out of China, most are rebuilding them abroad, primarily in Southeast Asia.

Trump’s attacks could put him under intense pressure at the Group of Seven summit in France this weekend, where he has called a special session to discuss the global economy. He repeatedly lauds the nation’s economic prowess, while saying economies elsewhere in the world are in trouble.

But the U.S. economy’s performance is much more intertwined with global pressures than Trump has acknowledged, and this entanglement is forcing White House officials to decide whether they need to recalibrate Trump’s approach before the 2020 election or stick with the president’s impulses.

The new import taxes range from 5 to 10 percent and take effect Sept. 1 and Dec. 15 – the same dates Trump’s latest tariffs on $300 billion in Chinese goods are slated to kick in – the Chinese finance ministry announced. A 25 percent tariff on automobiles and a 5 percent levy on auto parts go into effect Dec. 15.

“China’s imposition of tariffs is a forced response to the unilateralism and trade protectionism of the United States,” said the Communist Party-run Global Times. The outlet said it hoped the trade conflict would be resolved “on the premise of mutual respect and equality and trustworthiness in words and deeds.”

The Dow Jones industrial average sank more than 530 points, or 2%, after Trump’s comments. The Standard & Poor’s 500 was off 2.2% and the tech-heavy Nasdaq Composite down 2.7% in early afternoon. trading.

“The global growth outlook has been deteriorating since the middle of last year. Trade policy uncertainty seems to be playing a role in the global slowdown and in weak manufacturing and capital spending in the United States,” Powell said.

But Powell offered little by way of concrete assurance, saying the Fed would “act as appropriate to sustain the expansion” – a phrase he returns to frequently – and cautioned that there are “no recent precedents” to guide policy response to the trade war.

“While monetary policy is a powerful tool that works to support consumer spending, business investment, and public confidence, it cannot provide a settled rulebook for international trade,” Powell said.

Conservative groups were taken aback by the president’s order for companies to cut ties to China, saying they did not expect such a significant escalation from the president.

“The instruction for U.S. firms to leave China was quite stunning. I’m completely surprised by it,” said Alison Acosta Winters, senior policy fellow at Americans for Prosperity, a conservative group. She said there was “tremendous concern” among lawmakers, including congressional Republicans, about the direction of the trade war, which has hogtied the world’s two most powerful economic engines for more than a year.

The conflict has taken toll across the globe. China’s economic growth has slowed to its lowest rate in 27 years, as factory output declines and unemployment rises. Central bank leaders in Europe, Asia and Australia have cut interest rates in recent weeks, citing the need for economic stimulus.

Domestically, the manufacturing sector contracted for the first time in a decade. The U.S. manufacturing purchasing managers’ index fell to 49.9 in August, from 50.4 in July, according to IHS Markit. It is the first time the closely watched indicator has fallen below 50 since September 2009.

Sales of U.S. exports have decreased at the fastest pace since August 2009. When exports fall, manufacturers typically react by reducing inventories and cutting production, which can lead to job cuts. Airfreight volumes fell nearly 5 percent in June, marking the eighth consecutive month of decline. Freight airlines cited the U.S.-China standoff as a prime reason for slumping demand.

While American consumers, whose spending fuels about 70 percent of the U.S. economy, have largely been shielded from the trade war’s carnage, that’s poised to change. Earlier this week, JPMorgan estimated that American families will absorb another $1,000 in annual costs from all Chinese tariffs after the 10 percent levies take hold. If the upcoming tariffs are raised to 25 percent, as Trump has warned, that cost jumps to $1,500, researchers estimated.

And last week, for the first time since the run-up to the Great Recession, the yields – or returns – on short-term U.S. bonds eclipsed those of long-term bonds. This phenomenon, which suggests investor faith in the economy is faltering, has preceded every recession in the past 50 years.

Despite signs of a homegrown slowdown, Trump – at least publicly – maintains that the U.S. is immune to the weakening economic trends rattling other countries. In tweets Friday morning before China’s tariffs announcement, Trump blamed the media and political foes for recession fears that have gripped the U.S. for the past week.

“The Economy is strong and good, whereas the rest of the world is not doing so well,” Trump tweeted Friday morning, before China’s retaliation was announced.

But even as he has touted the strength of the U.S. economy, Trump has repeatedly attacked Powell for not providing enough stimulus through rate cuts, despite the fact that the central bank cut rates in July for the first time since the financial crisis.

“Trump has been publicly berating the Fed Chair for the last year but has really stepped up his attacks in recent months as the economy has weakened, recession warnings have started flashing red and the need for someone else to blame has intensified,” Craig Erlam, an analyst with OANDA, wrote in a note to investors Friday. “The trade war is taking its toll and heading into an election year, Trump does not want fingers pointing at him.”

In comments on Fox Business Friday morning, Trump’s chief trade adviser Peter Navarro downplayed the effect of the tariffs and echoed Trump’s claims that the greatest threat to the American economy is the Fed’s reluctance to follow other central banks in monetary easing.

“$75 billion worth of tariffs in terms of, what, the combined $30 trillion economy is not something for the stock market to worry about, and we’re cool here, so why don’t we talk about what matters,” Navarro said, adding that the impact of the latest tariffs should “already have been baked into the market.”

In private, Trump and his aides have been scrambling to avert an economic downturn, The Post has reported. Ideas that have been floated include imposing a currency transaction tax that could weaken the dollar and make U.S. exports more competitive; creating a rotation among the Federal Reserve governors that would make it easier to check Powell – whom Trump has relentlessly castigated for not doing more to increase growth – and pushing to lower the corporate tax rate to 15 percent in a bid to spur more investment. Some, if not all, of these steps would require congressional approval.