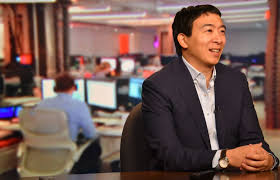 Democratic presidential hopeful Andrew Yang is vowing to pay every American citizen between the ages of 18 and 64 a $1,000 check once a month if he is elected in 2020.

Yang, who is running his presidential campaign largely around the idea of universal basic income, already launched a pilot program for free cash payments known as the Freedom Dividend, CNBC reported on Wednesday.

For the program, Yang selected a family in Goffstown, New Hampshire, who he says will be receiving $12,000 in free cash for the year.

To fund a larger-scale version of his plan that would cover all Americans, Yang told CNBC he plans to impose value-added tax of 10 percent on the goods and services that a company produces once he is elected.

The move could reportedly raise anywhere between $500 billion-$1 trillion depending on how the tax is applied.