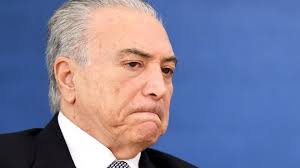 Brazil President Michel Temer suffered a setback in trying to fend off allegations of corruption and cover-up after the country’s influential bar association voted in favor of his impeachment.

The council of Brazil’s Order of Lawyers, or OAB by its Brazilian acronym, voted 25 to 1 in favor of an impeachment hearing for Temer, and will file its request in the lower house of Congress in coming days, it said early on Sunday. The OAB says Temer failed to denounce criminal activities, broke with presidential decorum, and promised undo favors to individuals.

“We are going to ask for the impeachment of another president of the republic, the second in a year and four months,” OAB president Claudio Lamachia said in a statement posted on the group’s website. Temer’s predecessor, Dilma Rousseff, was impeached in 2016.

Temer attempted in a publicly televised speech on Saturday to discredit evidence the Prosecutor General Rodrigo Janot says shows the president engaging in a cover-up and possibly passive corruption. Janot earlier this month obtained Supreme Court authorization to investigate Temer, according to court documents made public on Friday.

Underlying the probe is a recording made by JBS chairman Joesley Batista in March in which he and Temer allegedly discuss payoffs and influence-trafficking. Temer says he met with Batista but denies wrongdoing, saying the evidence was doctored.

Several parties from Temer’s ruling coalition will meet later on Sunday to discuss whether they will leave the government. On Saturday, the Brazilian Socialist Party announced it was switching to join the opposition.