When the White House released a one-page outline of President Donald Trump’s tax plan last week, there were reports of celebration and fist-bumping at hedge funds – even though the president had once promised to take on Wall Street and force investment managers to pay more in taxes.

That celebration at hedge funds will not last much longer, White House Chief of Staff Reince Priebus said Sunday, as the president wants to get rid of carried interest, a loophole that allows some fund managers to pay a lower tax rate than most Americans. Most Republicans are not fond of this idea, and it was not included in the released outline.

“That balloon is going to get popped pretty quick,” Priebus said of hedge fund excitement during an interview with ABC News’ “This Week” on Sunday. “So just stay tuned on that. So, I mean, carried interest is on the table, and the president wants to get rid of carried interest. So that balloon’s not going to stay inflated very long. I can assure you of that.”

When hedge fund managers take a cut of profits they earn for their clients, it’s called carried interest and is taxed at the long-term capital gains rate of 20 percent instead of the usual income tax rate, which can be as high as 39.6 percent. On the campaign trail, Trump said he wants carried interest to be taxed as income, as hedge fund managers are “getting away with murder” under the current setup.

Trump’s tax plan has been criticized for costing too much and benefiting the wealthy instead of the working-class voters key to his electoral victory. Many Republicans have privately questioned his proposal to lower the corporate tax rate to 15 percent, well below where GOP lawmakers had been targeting.

Trump said in an interview with CBS News’ “Face the Nation” that aired Sunday that he would pay for the tax cut with money collected from reciprocal taxes, more favorable trade deals and an improved GDP. When pressed, the president said he is “not going to touch” Medicare funding, which some Republicans have suggested cutting.

Senate Minority Leader Charles E. Schumer, D-N.Y., blasted the Trump tax plan, noting that 90 percent of the benefits proposed go toward top income earners while the vast majority of workers would take a hit because of the proposed elimination of deductions for state and local taxes. He said the tax plan is close to traditional conservative Republican orthodoxy, showing the president is “not governing from the middle, he’s governing from the hard right.”

“That is not how Donald Trump campaigned,” Schumer said on NBC News’ “Meet the Press” on Sunday morning, pointing to the tax plan as one of many campaign promises that Trump has abandoned.

Priebus would not say whether the president would be willing to raise taxes on the country’s wealthiest people because he did not want to “get ahead of where we’re at on the negotiation side.” But he said that even though the top tax rate would be lowered, the wealthiest individuals would no longer be able to take certain deductions – so he doesn’t expect a major reduction in Trump’s personal taxes.

That’s a difficult assertion to fact-check, as Trump has refused to release his tax returns, citing an ongoing audit by the Internal Revenue Service. Trump said on CBS News that once the audit is complete, he will “make a decision” about releasing his returns. He and others also argued that Americans don’t care about his tax returns or what is in them, even though polling has consistently shown that a majority of Americans do care. 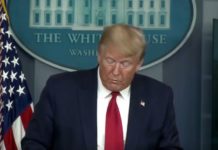