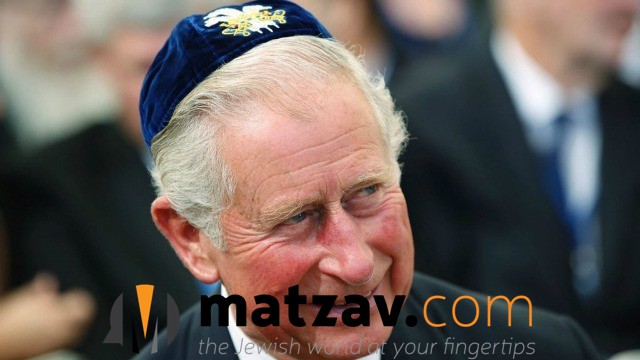 Prince Charles, the UK’s Prince of Wales, visited the grave of his grandmother, Princess Alice of Battenberg, on Har Hazeisim after attending the levayah of Shimon Peres on Friday. The Prince decided to visit the grave after Malcolm Hoenlein, the Executive Vice Chairman of the Conference of Presidents of Major American American Jewish Organizations, met the Prince at the funeral, briefing him on the extensive efforts to secure and preserve Har Hazeisim. Mr. Hoenlein, a prominent member of the leadership of the International Committee for the Preservation of Har Hazeisim, told the Prince that as a result of the work of the ICPHH, surveillance cameras were installed and police were now stationed there. “It is safe for you to visit,” Mr. Hoenlein urged the Prince who immediately turned to an aide “I would like to visit that wonderful place.”

At an event in the House of Commons in July marking the inauguration of a UK chapter of the ICPHH, Prince Charles sent an emissary to congratulate the formation of the Committee. In addition, Princess Katarina of Yugoslavia, a maternal granddaughter to Princess Alice, personally came to the event and extended greetings. She accepted an invitation by Menachem Lubinsky, co-chairman of the ICPHH to visit Har Hazeisim in 2017. In the only previous visit by a royal family member to Har Hazeisim, Prince Philip, the son of Princess Alice and mother-in-law of Queen Elizabeth, visited his mother’s grave in 1994.

Princess Alice of Battenberg, who is said to have expressed a wish to be buried on Har Hazeisim, lies at the Church of Mary Magdalene. She was recognized by Yad Vashem as a member of the Chaisdei Umos Haolam (Righteous Among the Nations). She is also recognized by the British Government as a “Hero of the Holocaust” as well. These honors were granted her after it was learned that while in Greece in 1943, she provided shelter to Jews including the wife and children of Haimaki Cohen, a Greek Jewish parliamentarian, during the Nazi occupation.

The princess was born in 1885, initially diagnosed hearing-impaired and later diagnosed with schizophrenia. At age 18 she was married to Prince Andrew of Greece and of Denmark. The couple produced four daughters and a son — Prince Phillip, Duke of Edinburgh, who later became the husband to England’s Queen Elizabeth II, and the couple produced Prince Charles of Wales.

Princess Alice died at London’s Buckingham Palace in 1969, expressing the wish to be laid to rest at the convent in Jerusalem. But it took more than a decade to fulfill that last wish, inasmuch as the UK does not recognize Israel’s sovereignty over that part of its capital, where the princess wished to be laid to rest. As a result, the British royal family has imposed strict restrictions on official visits to Israel. The media team with Prince Charles did not report on the visit.

According to Hoenlein, the Prince demonstrated an extraordinary interest in Har Hazeisim, even wondering if it were possible to see the mountain from his seat on Mt. Herzl. When Hoenlein told him that it was only a short distance away, the Prince began to seriously consider a visit, which he ultimately made to Har Hazeisim.

Har Hazeisim is the oldest surviving Jewish cemetery in the world, dating back over 3,000 years and is the resting place for over 150,000 Jews. Despite being in Israeli hands, the cemetery remained largely neglected until May 2010 when Israel’s State Controller Micha Lindenstrauss issued a stinging report on the neglect and abuse of one of Judaism’s holiest sites. This shocking report prompted Avrohom Lubinsky, a Brooklyn NY businessman, to create the International Committee for the Preservation of Har Hazeisim, which now has chapters in New York, Los Angles, Jerusalem, Toronto, London and Amsterdam. Since then, Har Hazeisim has once again become secure, encouraging tens of thousands of people to visit. The Committee is planning to build a Visitor’s Center and shul, restore some 23,000 graves, continue to upgrade security by having a wall and gates built, improve maintenance, and embark on other infrastructure projects.