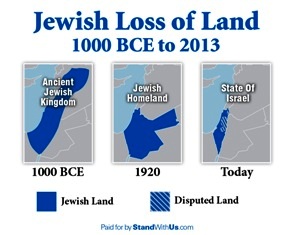 (JNS.org) The pro-Israel education groups StandWithUs has responded to anti-Israel advertising on Vancouver’s public transit system with new ads stressing both the Jewish loss of land from biblical times to the present and Israeli-Canadian shared values.
Posters sponsored by the Palestine Awareness Coalition on Vancouver’s TransLink trains and buses depict Israeli land as a “disappearing Palestine.”

StandWithUs responded with 10 posters in the Translink system that will be up until Nov. 14. One set of ads juxtaposes a map of the ancient Jewish kingdom before 1,000 BCE, a map of the land designated as the Jewish homeland by the League of Nations in 1920, and a map of the smaller current state of Israel. The other set features Israeli and Canadian children waving their national flags.