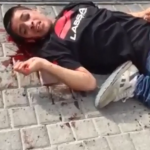 The wave of Palestinian violence and terrorism currently plaguing Israel began during the Yomim Tovim. So far, 12 Israelis have been killed.

The current wave of violence is part of the overall “popular resistance” strategy adopted by the Palestinian Authority and Fatah at the Sixth Fatah Conference in August 2009. It is manifested by rising and falling levels of popular terrorism, supported and condoned by the PA.

A general profile can be drawn from the profiles of 35 Palestinians who carried out recent attacks. The most common profile is male, age 17-19, unmarried, and from southeast Yerushalayim or the Chevron region, according to the Intelligence and Terrorism Information Center.

He carries out the attack following a spontaneous personal decision without instructions from any organization or leadership. He does not follow an Islamist ideology (some of the terrorists were fairly secular) and does not belong to a terrorist organization.

He is willing to risk his life and aspires to follow in the footsteps of Palestinians who died initiating the current wave of terrorist attacks. Copying them has become a challenge and “fashionable.”