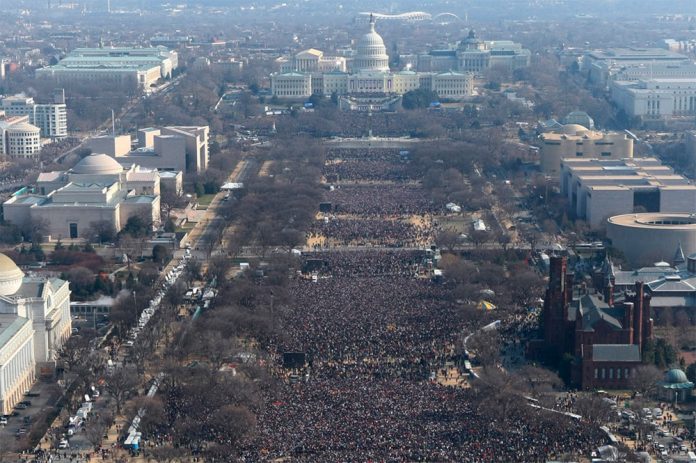 Federal prosecutors Thursday dropped their cases against seven people charged with rioting during President Donald Trump’s inauguration after a Washington, D.C., judge determined that the government intentionally misrepresented information and withheld evidence from the defense.

Assistant U.S. Attorney Jennifer Kerkhoff had repeatedly told the court and defense attorneys that her office possessed a single video of a protest-planning meeting, secretly recorded by a conservative group that had infiltrated the meeting. But on Wednesday, the U.S. Attorney’s Office acknowledged in an email to defense attorneys that 69 such undercover videos or audio recordings existed. Prosecutors wrote that they had turned over evidence they deemed relevant to the cases.

During a hearing Thursday in D.C. Superior Court, Judge Robert Morin pressed prosecutors about the omission.

“It was intentional. Your office represented there was only one video,” Morin said. “The government has not offered any explanation as to why they did not inform the court of these additional videos.”

A week before the case was to go to trial, Assistant U.S. Attorney Ahmed Baset said prosecutors would withdraw charges, with the option of reinstating them. He did not offer an explanation. Over Baset’s objection, Morin dismissed the cases with prejudice, meaning the charges cannot be reinstated.

The dismissals marked the latest turmoil in criminal cases stemming from the mass arrests on Jan. 20, 2017. More than 200 people were accused of smashing windows and rioting for some 16 city blocks in downtown Washington, D.C.

Defense attorneys have strenuously pushed back, saying that most people who joined protests that day were demonstrating legally and that only a small group peeled off to vandalize.

Defense attorneys on Thursday praised Morin for holding the government accountable for the discrepancy in evidence. They said that their clients had been deprived of the opportunity to examine all the video evidence and that it would have been unfair to proceed to trial.

“In making his decision, Chief Judge Morin had to figure out how to rebalance the scales of justice, which, for our trial group, he succeeded in doing,” said attorney Andrew Clarke. “We have been fighting for the First Amendment rights to protest for more than a year with these cases.

Clarke’s client Dylan Petrohilos, 29, who had been charged with rioting, said he and others had faced unfair prosecution.

“This happens often in this city to poor people and people of color. But we were able to expose it,” Petrohilos said.

Kerkhoff was not present for the hearing before Morin because she was in a separate trial in the rioting case. Her colleague Baset told the judge that the government meant it had only one video from that particular planning meeting, but Morin responded that that was not what Kerkhoff told the court. Baset then said he could not speak on her behalf.

Jessie Liu, the U.S. attorney for the District of Columbia, declined to comment on the issue.

Legally, prosecutors must provide their evidence to the defense at the earliest possible time, even if that evidence weakens their case. Failure to do so can be considered misconduct and a violation of a 1963 rule based on the U.S. Supreme Court case Brady v. Maryland.

Careful prosecutors will often turn over as much material as possible to the defense because they recognize that their cases could be jeopardized later if they fail to turn over some information.

An inherent problem with the system, according to former federal prosecutor Barak Cohen, is that it asks “the fox to guard the henhouse.”

“Even a well-intentioned prosecutor is less likely to think creatively and aggressively about what might be exculpatory than a defense lawyer fighting to protect a client,” said Cohen, now a white-collar defense lawyer with Perkins Coie.

Concerning the scale of the material withheld, Cohen said that “even a small violation of Brady is problematic, but the bigger the misconduct, the more it calls into question the prosecution’s tactics.”

In all, 234 people were charged in connection with the Inauguration Day disturbances. Twenty of those people have pleaded guilty, and prosecutors dropped cases against 20 in early reviews.

The first trial, late last year, resulted in acquittals for all six defendants after jurors said they found no evidence that the six were personally involved in the destruction.

The acquittals forced prosecutors to reexamine the remaining cases. In January, the government dropped its cases against 129 people. The cases of 52 defendants are pending.

In addition to dismissing the cases Thursday, prosecutors also said they would not use the undercover videos in any remaining cases because they have become a distraction. The footage came from Project Veritas, a group that uses secret recordings to target the mainstream news media and left-leaning groups.

The Project Veritas video also has come under scrutiny in cases involving other Inauguration Day defendants. In a case involving a separate group of defendants, Morin found that the prosecution improperly edited the video. He dismissed Kerkhoff’s argument that it was altered solely to protect the identity of both the Project Veritas informant and an undercover police officer.

In another case, Superior Court Judge Kimberley Knowles ordered that the defense be permitted to meet with the person from Project Veritas, referred to in court only as Matt, who recorded the video.

During that Memorial Day meeting, defense attorneys said in court, Matt said that as many as eight Project Veritas informants attended various protest-planning meetings before the inauguration and made additional recordings. Knowles denied a defense request in that case to dismiss charges but said the government had been “negligent” in not revealing the other recordings to the defense.

Kerkhoff argued before Knowles that she turned over only video that prosecutors used to link the four defendants to the criminal charges.

“We tried to do what the court ordered us to do and focus on criminal conduct,” Kerkhoff told Knowles on Tuesday in court. “I don’t have this massive trove the defense thinks exist.”

The jury in the case before Knowles begins deliberations Friday.