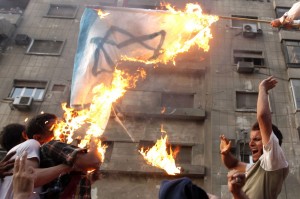 What started off as a protest against the US military’s air strike against the brutal Syrian regime quickly turned to hate against the State of Israel Saturday.

Dozens of Syrian students on Saturday gathered outside the offices of the United Nations in Damascus to protest a US missile attack on an air base.

Tensions skyrocketed this week after an alleged chemical weapons attack by the Syrian government, which killed dozens of people, was met with a retaliatory strike by the US, who destroyed a Syrian air base with Tomahawk missiles.

The protesters held banners and chanted “Death to America” and “Death to Israel.”