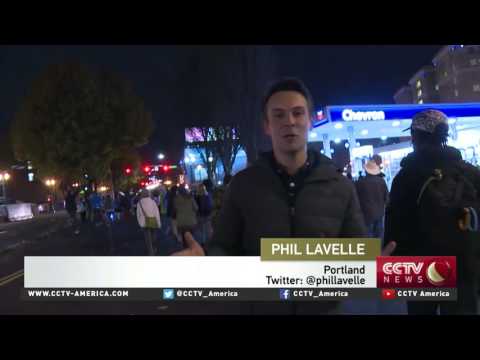 A confrontation between a man in a car and an anti-Donald Trump protester in Portland ended in gunfire early this morning, sending the demonstrator to the hospital as dozens of sometimes violent protests have popped up in U.S. cities in the wake of Trump’s victory in the presidential election.

In Portland, the site of some of the most virulent anti-Trump protests, demonstrators took to the streets on Tuesday, even before the Associated Press declared Trump the winner.

They’ve marched every night since.

Demonstrators there hurled burning projectiles at police, destroyed property and injured people during rallies, according to the AP. Police responded with tear gas and flash-bang grenades Friday to try to disperse the crowd of hundreds marching through the city.

More than 225 people have been arrested across various cities – at least 185 in Los Angeles alone, the AP reported – amid demonstrations that have included highway blockades, angry chants of “not my president” and a rampage through Portland.

Since Donald Trump’s unexpected victory in the presidential election on Tuesday, protests had emerged in Portland and other major cities across the country, as thousands of people poured onto the streets to rail against the ascension of a man who had, at various points, belittled women, immigrants and numerous other groups.

On Friday night, people marched in cities including New York, the District, Dallas, Miami, Orlando, Raleigh and Portland — where, for a second night, demonstrations turned violent. More rallies were planned through the weekend in scattered cities.

There were spirited demonstrations on college campuses and peaceful marches along downtown streets. Hundreds joined an afternoon “love rally” in Washington Square Park in Manhattan.

The shooting in Portland happened Saturday as protesters crossed the Morrison Bridge over the Willamette River. The man in the car got out and fired several shots at the demonstrator, according to a police news release.

Police nearby rendered aid to the victim but had not apprehended the suspect, described as a 5-foot-8 black man in his late teens wearing a hoodie and blue jeans.

Cameron Whitten, a witness who went on Facebook live, said the confrontation started after protesters “recognized (the people in the car) as being involved in the protests. And they recognized these people as people who were involved in physically damaging, looting, rioting that we saw the last two days.”

In Portland – a place still tied to the nickname “Little Beirut” for its history of protests – the first two nights of rallies were largely calm, with just a few scattered issues since people began marching before the Associated Press even declared Trump the winner late Tuesday.

But on the third night, as activists and organizers say the crowd blossomed through people learning of the gathering on social media, the unrest took a violent turn. Police said late Thursday that the protest was “now considered a riot” due to what officials called “extensive criminal and dangerous behavior.”

Authorities said there were “anarchist groups” among the crowd and sought to divide the peaceful demonstrators from those they said were destroying property, smashing electrical boxes with baseball bats and spray-painting buildings, prompting authorities to use pepper spray and fire rubber rounds.

Confrontational, physical protest ranging from mass gatherings and vigils to disruptive direct actions has for decades been a staple of grass-roots political activism, specifically among Americans on the center-left of the political spectrum, from the civil rights and antiwar movements of the 1960s to the contemporary Occupy Wall Street and Black Lives Matter protest movements.

And, in the wake of Trump’s election, many civil rights, environmental, immigration, labor rights and LGBT activists – all of whom have frequently deployed street marches and disruptive protests during the Obama years – saw taking to the streets as the clear first step in collectively registering their opposition of what they fear is to come.

“We can be certain that these protests portend far larger ones in the future as social movement groups prepare to resist any policies of the new administration that threaten people stigmatized by Trump or that scientific evidence suggests will hasten environmental catastrophe,” said T.V. Reed, a Washington State University professor and author of the book “The Art of the Protest.”

“Blocking traffic and other such tactics are meant to symbolize that the new administration’s policies will be vigorously and massively resisted if they seek to institutionalize the bigotry, racism, xenophobia and misogyny they see as rampant in the Trump campaign,” he said.

Some demonstrations appeared spurred by social media and word-of-mouth, with some people were seemingly joining groups in New York and Los Angeles because they saw the rally in person or online and wanted to join in.

Others were more organized, with MoveOn.org, a liberal group, calling on people to gather in cities nationwide Wednesday. Ben Wikler, MoveOn’s Washington director, said different people organized events in 275 cities and communities across the country, noting that many were candlelight vigils and group discussions rather than the sprawling marches.

“Just knowing that you’re not alone in this country is a powerful salve,” Wikler said Thursday.

Gregory McKelvey, who has organized Black Lives Matter events in Portland, said he is behind the Facebook posting announcing the “Portland’s Resistance” event, and he said his group was unaffiliated with those who turned violent.

“We think Portland has the opportunity to be a beacon of light during a dark Donald Trump presidency,” said McKelvey, whose group has issued a list of demands calling for rent control, abortion rights and safe streets. “It’s because he got elected that we feel (we) are unsafe, so we want our city to be a safety net.”

McKelvey said that once protesters learned there were violent people among the demonstrations, “we attempted to separate.” Teressa Raiford, a community organizer in Portland, said these other people were unaffiliated with peaceful protesters and were “not coming to show solidarity; they’re coming because they know there’s going to be a big crowd.”

“I’m saddened by the destruction of our public spaces and local businesses caused by rioters,” Portland Mayor Charlie Hales said in a statement. “Although the majority of over 4,000 protesters last night were peaceful and followed Portland Police safety instructions, anarchists shut down these voices by spreading violence and fear.”

“Their tactic is go out and destroy property,” Simpson said. He noted that while peaceful demonstrators tried to stop the violence, they were “not having any luck.”

These “black bloc” groups rely on a tactic of wearing masks to cover their faces and dressing in black so they can identify each other, said David Gomez, a former senior FBI counterterrorism official in Seattle, a city that has seen high-profile issues with such groups.

“What they’re doing is they’re taking advantage of the legitimate protesters to destroy things and emphasize their anarchist roots,” Gomez said. “So you’re not going to see them at a tea party protest, except maybe as counterprotesters. But you will see them where you have very progressive political movements, [like] Seattle and Portland.”

The Portland police said they arrested 25 people during the unrest Thursday night, largely for disorderly conduct and interfering with peace officers. On Friday night, protesters gathered again for a “heal-in” at city hall, and later on the gathering intensified as the group splintered into different marches. After some demonstrators threw glass bottles at police, officers in riot gear deployed tear gas, flash grenades and rubber bullets, warning protesters that they would be arrested if they remained on scene. McKelvey’s group again said it did not condone any violence.

In Santa Ana, California, about an hour from Los Angeles, Naui Huitzilopochtli said he got motivated after the election. The Mexican indigenous rights activist knew he couldn’t stand by idly after Trump, who vowed to deport millions, was elected. So he posted an event on Facebook, calling people to protest.

A few dozen people showed up to the event, which was held on a sidewalk near a gas station in Santa Ana, after it began Thursday afternoon. As the evening went on, it ballooned in size and moved down a main street. About 650 people ultimately got into a standoff with police, and 10 were arrested.

“I project this may become the new normal,” Cpl. Anthony Bertagna, a spokesman for the Santa Ana Police Department, said after demonstrations there.

For more than an hour they continually crossed a four-way intersection, walking in a square from the gas station to an auto-parts store to a food stand and back again. They then walked down the street and clashed with police, who fired bean bags, and authorities said people threw bricks, bottles and other objects and damaged four cars and two businesses in the early hours Thursday.

“Our population is growing, and we are the sleeping giant. We just need to wake up, and if we do that, Donald Trump won’t be able to do nothing,” Huitzilopochtli said. He added: “This is a Mexican community.”

A 15-year-old who came to protest said she fears Trump will deport immigrants, while her 2-year-old sister held a sign that read, “Stop white supremacy.”

The demonstrations have played out across social media and on cable news networks, with some channels showing four or six gatherings simultaneously.

In many cases, police said they encountered few if any issues. Boston had about 4,000 people during a rally Wednesday night, and it was “orderly and peaceful,” a police spokesman said. Other cities have seen confrontations, including between two men – one identified as Trump supporter – who argued with demonstrators on a Chicago street outside Trump Tower.

“This could be the beginning of a revolution,” said Johnathan Hahn, 19, during the Chicago demonstration late Thursday. “This is a moment that will echo in time. No one knows what the future holds. But we need to organize, to spew love, caring, harmony and equality, the things that will make Trump lose his lunch.”

Jessica Orman, 24, said at the same event that she hopes the electoral college opts to pick Clinton rather than Trump. “I don’t think it will happen . . . but we have to fight. We have to protest,” she said.

“I see people differently now,” Orman said. “I don’t smile at people on the street anymore. Because you never know.”
WATCH: