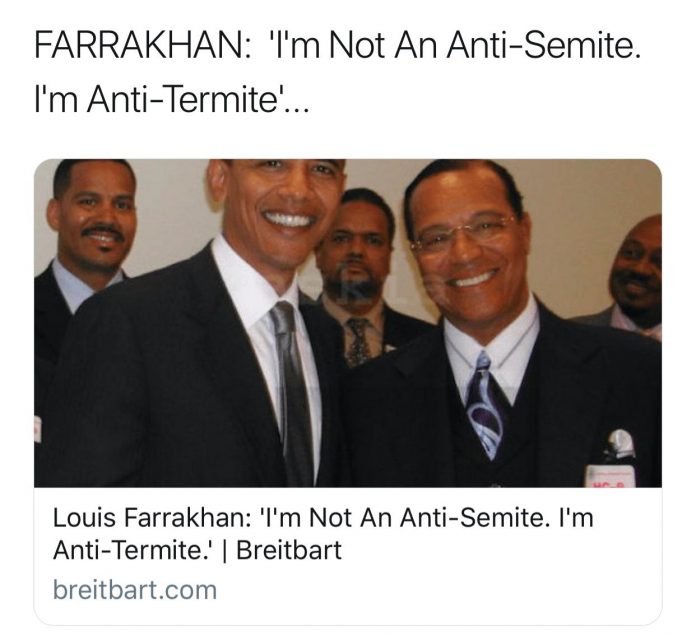 Nation of Islam leader Minister Louis Farrakhan posted a clip of a Sunday speech in Detroit, in which he compared Jews to termites and claimed both white and Jewish people are working against him, Newsweek reports.

Farrakhan made the comments in Detroit during Sunday’s 23rd anniversary event for the 1995 Million Man March in Washington, D.C. Speaking at the recently renamed Aretha Franklin Amphitheatre, the controversial minister said he supports Kanye West’s remarks about repealing the 13th Amendment. Farrakhan had also followed up an anti-Semitic rant in May by making a joke about being “anti-Termite.”

White folks don’t like Farrakhan,” the Nation of Islam leader said. “Some of them respect me. To the members of the Jewish community that don’t like me, thank you very much for putting my name all over the planet because of your fear of what we represent. I can go anywhere in the world and they’ve heard of Farrakhan. Thank you very much.”

“I’m not mad at you because you’re so stupid,” Farrakhan continued. “So when they talk about Farrakhan, call me a hater, you do what they do, call me an anti-Semite. Stop it, I’m anti-Termite.”

In May, Farrakhan lost his Twitter verification status after ranting about “satanic Jews” during a three-hour speech. “I wonder, will you recognize Satan? I wonder if you will see the satanic Jew and the synagogue of Satan…because Satan has deceived the whole world.”

“Farrakhan’s vile statements against Whites and Jews have been ignored by my fellow Democrats,” Hikind said in a press release today. “There is nothing subtle about this modern-day Goebbels’ hatred. This racist doesn’t even hide behind an anti-Israel statement; he just publicly attacks Jews and the Jewish religion, and works to incite hatred and racism among his followers. Even worse, Democrats continue to give him a pass. Former President Bill Clinton sat next to him at Aretha Franklin’s funeral. It was appalling!”