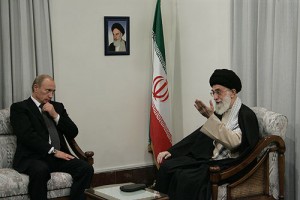 Russian President Vladimir Putin makes his first trip to Iran since 2007 this week, and will meet with Iranian Supreme Leader Ayatollah Ali Khamenei as well as President Hassan Rouhani.

The meeting will be conducted on the sidelines of the Gas Exporting Countries Forum in Tehran, Putin’s presidential aide Yury Ushakov said. The talks will focus on “issues in bilateral relations, including atomic energy, oil and gas and military-technical cooperation,” Ushakov added.

Russia has sought to deepen economic ties with Iran following world powers’ nuclear deal with the Islamic Republic in July. Both Russia and Iran are supporting Syrian President Bashar al-Assad in his country’s civil war, with Russia providing air support and Iran reportedly supplying thousands of troops on the ground.

Russia has sought a broader coalition of countries to help it fight the Islamic State terror group in the wake of the bombing of a Russian airliner over Egypt’s Sinai Peninsula in late October, an attack Islamic State said it committed. In recent days, Russia has stepped up its bombing campaign in Syria.