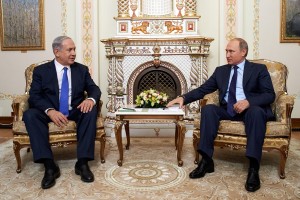 “Israel and Russia share a common interest to ensure stability in the Middle East. And I am here because of the security situation which is becoming ever more complex on our northern border,” Netanyahu said.

During the press conference, Netanyahu addressed concerns about an Iranian backed terrorist front opening up on its northern border. “Iran, under the auspices of the Syrian army, is attempting to build a second terrorist front against us from the Golan Heights,” Netanyahu claimed. The Israeli Prime Minister pointed to recent shipments of advanced weapons to Hezbollah from Iran and the current Syrian regime.

“Under these circumstances, I thought it was very important that I come here, also to clarify our policies, and to make sure that there is no misunderstanding between our forces,” Netanyahu assured Putin. Members of Russia’s armed forces in Syria make Israel’s tactical striking of arms shipments to Hezbollah more complicated since Israel would need to avoid any inadvertent casualty among Russian forces during such an operation.
For his part, President Putin assured Prime Minister Netanyahu that “all of Russia’s actions in the region will always be very responsible.”

Putin also condemned all attacks on Israel but avoided making a reference to Hezbollah. “We are aware of the shelling against Israel and we condemn all such shelling,” said Putin. “I know that these shellings are carried out by internal elements.”

Putin also doubted Netanyahu’s suggestion that the Syrian government would open up a terrorist front against Israel. “In regard to Syria, we know that the Syrian army is in a situation such that it is incapable of opening a new front,” argued Putin.

Although diplomatic relations between Israel and Russia have grown and advanced since the fall of the Soviet Union, significant differences remain between both countries on various Middle East issues. Russia maintains strong connections with Iran and Syria, both of which are enemy regimes of Israel. In contrast with Israel, Russia also views Syria’s President Basher al-Assad as a necessity for maintaining stability and order in Syria.
Despite existing disagreements, both leaders assured the other of maintaining good relations. “In all of the relations between us, whether I agreed and also when we differed, our discourse has always been conducted with mutual respect and openness,” Netanyahu told Putin.

While Putin made it clear that Russia’s “main goal is to defend the Syrian state,” he also expressed a cordial greeting to Netanyahu. “I understand your concern and I am very pleased that you have come here to discuss all issues in detail,” Putin said to Netanyahu.