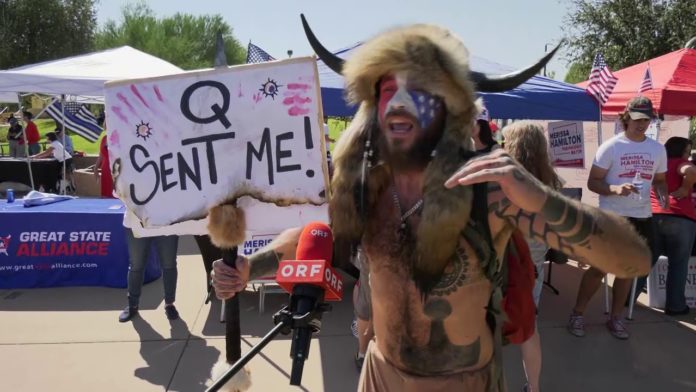 Followers of the extremist ideology QAnon saw their hopes once again dashed Wednesday as President Trump left Washington on the final day of his presidency, without any of the climactic scenes of violence and salvation that the sprawling set of conspiracy theories had preached for years would come.

As Trump boarded Air Force One for his last presidential flight to Florida, many QAnon adherents — some of whom had earlier this month stormed the Capitol in a siege that left at least two QAnon devotees dead and others in jail — began to wonder whether they’d been duped all along.

When one QAnon channel on the chat app Telegram posted a new theory that suggested Biden himself was “part of the plan,” a number of followers shifted into open rebellion: “This will never happen”; “Just stfu already!” “It’s over. It is sadly, sadly over.” “What a fraud!”

But while some QAnon disciples gave way to doubt, others doubled down on blind belief or strained to see new coded messages in the Inauguration Day’s events. Some followers noted that 17 flags — Q being the 17th letter of the alphabet — flew on the stage as Trump delivered a farewell address.

“17 flags! come on now this is getting insane,” said one post on a QAnon forum devoted to the “great awakening,” the quasi-biblical name for QAnon’s utopian end times. “I don’t know how many signs has to be given to us before we ‘trust the plan,’” one commenter said.

Over thousands of cryptic posts since 2017, Q, QAnon’s unidentified online prophet, had promised that Trump was secretly spearheading a spiritual war against an elite cabal of child-eating Satanists who controlled Washington, Hollywood and the world. Believers in these false, rambling theories had counted down the hours waiting for Trump to corral his enemies for military tribunals and mass executions in a show of force they called “the Storm.”

But on Wednesday, as reality dawned, QAnon promoters who had gained thousands of online supporters by promising to decode Q’s arcane posts — and profited off their audience, by selling QAnon merchandise or online subscriptions along the way — scrambled to spin the truth of Trump’s loss or shift the goal posts of a deadline four years in the making.

One QAnon channel on Telegram with 40,000 subscribers noted that the last sentence of Eric Trump’s farewell tweet — “ … the best is yet to come!” — was also a common slogan for QAnon adherents, failing to mention that the phrase is a commonly used cliche. Another QAnon channel with 35,000 Telegram subscribers, devoted to the “Great Awakening,” highlighted Trump’s final remarks as president: “We will be back in some form — Have a good life. We will see you soon.”

“It simply doesn’t make sense that we all got played,” one QAnon channel on Telegram said.

Some of the most notable figures in QAnon’s online universe said they were having a change of heart. After Biden’s inauguration, Ron Watkins — the longtime administrator of QAnon’s online home, 8kun, who critics have suspected may have helped write Q’s posts himself, a charge he denies — said on Telegram that it was time to move on.

“We need to keep our chins up and go back to our lives as best we are able,” said Watkins, who in recent months had become one of the loudest backers of conspiracy theories suggesting Biden’s win was a fraud.

“We have a new president sworn in and it is our responsibility as citizens to respect the Constitution regardless of whether or not we agree with the specifics,” Watkins added. “As we enter into the next administration please remember all the friends and happy memories we made together over the past few years.”

“It’s something that has long been true of conspiracy theories: When they don’t come to fruition, they shift their delusions to the next thing,” he said. He noted how some comments posted below Trump’s farewell video suggested that “it wasn’t quite time for the Great Awakening, but it’s coming soon and this is how.”

Researchers said some QAnon supporters appear to be rethinking their commitment due to a range of factors, including Q’s relative silence since the election, Trump’s anticlimactic White House exit, and the Capitol insurrection, which resulted in more than 100 arrests and delayed the certification of Biden’s victory by only several hours.

But several feared that the rising intensity of those still committed to QAnon could create problems for years to come if a die-hard, militarized core persists in their belief that the U.S. government is controlled by evil pedophiles who successfully subverted the Constitution.

“What we’re seeing is a trend in increasingly bunker-down, apocalyptic language,” said Joel Finkelstein, co-founder of the Network Contagion Research Institute, a research group that studies online disinformation. “It’s gone from [talk of] a revolution to a civilization-ending kind of collapse.”

He and other researchers have also chronicled an increasingly global QAnon movement that could outlast its potential weakening in the United States as events and an aggressive crackdown by social media platforms limit the ideology’s reach among Americans. The QAnon followings in Germany and Japan are particularly strong and growing, said Finkelstein, whose research group tracked a surge in QAnon terms the morning of the Jan. 6 Capitol attack, including one that said “qarmyjapanflynn.”

“They’re going to reemerge at some point because they’ve internationalized,” he said. “There’s a metastization of QAnon from a national story to a global revolution.”

QAnon adherents had long anticipated Trump’s military strike against his foes, which they believed would play out like an action movie; the fact that Tuesday was “National Popcorn Day” on mainstream calendars seemed too perfect to be coincidence. Followers in recent days have seen coded messages everywhere: first lady Melania Trump’s black-and-gray coat, worn in her final address, was said to resemble the TV static that would signal the media blackout of Trump’s military takeover.

But on Wednesday, some promoters recognized that believers being confronted with the reality of QAnon’s baselessness were in need of encouragement. One forum offered doubters a “FAT DOSE OF HOPIUM” — their jargon, meaning reasons for hope — and urged readers to “GET IN HERE IF YOU’RE RUNNING LOW.” The thread used a nine-month-old Q post to suggest that Trump had coordinated another subtly brilliant move in his final hours in office: “He is metaphorically walking away in slow motion while the explosions go off behind him.”

One of the forum’s moderators, “God_Bless_America1,” posted a thread counseling that “POTUS has NOT let us down or failed, he has done all he could within his power and it is now going to be handing it to the military to take from here exactly as Q drop forecast.” Uncertainty, the moderator added, would not be tolerated: “ANY dooming or negative comments clogging up the site pertaining to current situation will result in removal and ban if repeated.”

Travis View, a researcher and co-host of the podcast “QAnon Anonymous,” said Inauguration Day had been seen as “a very special day in the QAnon community,” but that the responses to real-world events have been mixed.

Believers, he said, appear to be splitting between those who see Biden’s ascent to the White House as a sign that the Q’s prophecies were wrong and those who think they were right but need to be recast for a Biden administration in which Trump remains secretly powerful and able to control events unfolding in Washington.

“A minority are facing reality that Biden’s going to be president,” View said. “Others are coming to believe that the storm they were expecting is still going to happen but sometime during the Biden administration.”

The day also highlighted the deepening division between QAnon adherents and other far-right extremists, who have voiced growing doubts about Trump. A channel for the Proud Boys, an all-male extremist group prone to street fighting, said Trump had thrown Capitol rioters “under the bus” and called QAnon “a bolshevik lie.”

QAnon, as with most online creations, will likely not disappear any time soon. On Tuesday night, a small crowd of picketers rallied with signs urging “Repent or Perish” outside Comet Ping Pong, the D.C. pizzeria at the center of Pizzagate — the 2016 conspiracy theory from which QAnon was born.

View predicted that the QAnon community may shrink in the coming months but also become more fervent in their commitment to its ideas.

“History has taught us far-right movements don’t cool off during a Democratic administration,” View said. “The people who stick with it are going to become even more radicalized and potentially more dangerous.”