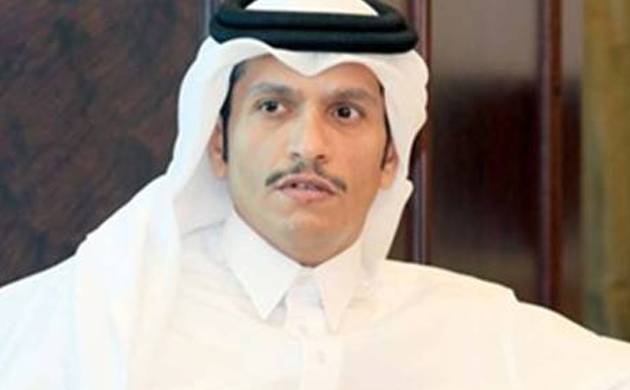 Qatar’s top diplomat said on Thursday that his country can sustain economic pressure from a Saudi-led coalition, striking a defiant tone as the worst crisis among U.S. Gulf Arab allies showed no signs of abating.

“We can live forever like this,” Foreign Minister Mohammed Al Thani told reporters in Doha. He said only 16 percent of Qatar’s food imports came through the now-closed land border crossing with Saudi Arabia “and it has been replaced already.”

“We aren’t ready to discuss an intervention into our sovereignty,” he said.

The minister said Saudi Arabia, the United Arab Emirates and Bahrain have yet to submit “clear demands” to resolve the crisis, which escalated on Monday when the three countries, along with Egypt, severed diplomatic ties as well as land, sea and air travel with Qatar. The four accuse the small Gulf nation of supporting Sunni extremist groups and Iranian-backed Shiite militants to destabilize the region.

The unprecedentedly harsh sanctioning of Qatar by Saudi Arabia and its allies has created a new flashpoint in an energy-rich region already convulsed by turmoil. The showdown deepened on Thursday, with the UAE banning all international flights serving Doha from flying through its airspace. The move expands on an earlier ban on direct flights between the two countries and UAE travel restrictions on Qatari passport-holders and citizens of other nations who have Qatari residence permits.

Confusion ruled on the seas as shippers sought clarity on the sanctions, risking leaving vessels locked out of regional ports.

A senior UAE official said on Wednesday that the alliance was ready to impose more penalties unless Qatar changes its policies. Saudi Arabia’s central bank has ordered lenders in the country not to increase their exposure to any Qatari clients, according to people familiar with the matter. The regulator also told banks licensed in the country that they should not process any payments denominated in Qatari riyals, the people said.

Additional punitive measures “could include restrictions on capital flows, which would be negative for Qatari banks’ liquidity and funding,” Moody’s Investors Service said in a report. “In a scenario of a rapid loss of confidence from international investors and depositors from other GCC countries, the government might have to step in to support domestic banks.”

S&P Global Ratings this week lowered Qatar’s long-term rating by one level to AA-, the fourth-highest investment grade, and put it on negative watch on concern the dispute will weaken its finances. Moody’s had taken a similar action before the crisis broke out, citing uncertainty over its economic growth model.

Tiny Qatar is the world’s No. 1 exporter of liquefied natural gas. Its $335 billion sovereign wealth fund owns stakes in global companies from Volkswagen to Glencore and Barclays. Its influence goes beyond money. It’s also home to the forward headquarters of CENTCOM, the U.S. military’s central command in the region.

The worst crisis in decades among the Gulf’s Arab monarchies is underpinned in part by the regional rivalry between Sunni-led Saudi Arabia, the Middle East’s strongest Sunni power, and Shiite Iran, which has cordial relations with Qatar, known for its contradictory ties. Qatar says the Saudi charges against it are a ploy for regional dominance, but frictions have been mounting for years over Qatar’s backing of the Muslim Brotherhood in Egypt and its Hamas offshoot in the Gaza Strip.

Saudi Arabia and Iran have both criticized each other for supporting Islamist groups fighting in Syria.

European foreign policy chief Federica Mogherini said on Twitter on Thursday that she had spoken with the foreign ministers of Saudi Arabia and Qatar and called for “direct dialogue to quickly resolve ongoing crisis.” On Wednesday, President Donald Trump, who initially came out in support of the Saudi-led action, called Qatar’s emir, Sheikh Tamim bin Hamad Al Thani, and offered to host talks between the U.S. allies.

Anwar Gargash, the UAE minister of state for foreign affairs, told Bloomberg in Dubai on Wednesday that Qatar needed to pledge to overhaul its foreign policy for any mediation to succeed. Leading the efforts to defuse the crisis is Kuwaiti ruler Sheikh Sabah Al-Ahmed Al-Sabah, who’s been shuttling among Gulf capitals for talks. He met Qatar’s emir in Doha on Wednesday.

Kuwait may hold the key to resolving the conflict, said Kamran Bokhari, senior fellow at the Washington-based Center for Global Policy.

“Doha is not without leverage,” Bokhari said. “It can drag this on. It also knows that Kuwait is not siding with the Saudis. In fact I suspect the Saudi plan involved keeping a door open. And that door is Kuwait.”

But Mokhtar Awad, a research fellow at George Washington University’s Program on Extremism, didn’t rule out a continued standoff.

“This can certainly turn into a new status quo, but certainly not to the benefit of any of the parties and certainly not Qatar,” Awad said. While there are “real risks” in provoking Saudi Arabia and the UAE, given the history of border skirmishes in the Gulf, “what’s more likely is the continued isolation of Qatar and sustained pressure by Saudi and UAE,” he said.