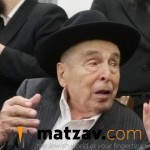 It is with great sadness that we report the passing of R’ Menachem Zev Halevi Edelstein z”l at the age of 95.

R’ Menachem Zev was born in Czechoslovakia to his parents, R’ Ezra and Serel Edelstein. R’ Menachem Zev, in his youth, learned in the yeshiva of the Damesek Eliezer of Vizhnitz.
After miraculously surviving the Holocaust, he moved to Miami, Florida, where he married his wife and they settled.

R’ Menachem Zev earned a fortune over the years in the real estate field, and with his largess, he became one of the greatest supporters of Vizhnitzer institutions.

R’ Menachem Zev would spend every Tishrei with the Yeshos Moshe of Vizhnitz in Bnei Brak.

The levayah was held at Bais Knesses Khal Chassidim in Shaarei Chesed, Yerushalayim, continuing in Kiryas Vizhnitz in Bnei Brak. He was buried at Ponovezher Bais Hachaim in Bnei Brak.

According to reports, R’ Menachem Zev left in his will a vast sum of money – in the many millions of dollars – to Vizhnitzer institutions, including the courts of Vizhnitz Bnei Brak, Vizhnitz Monsey, Seret-Vizhnitz, and Kiryas Maor Chaim.

According to one source, the will was written over a decade ago, and the money – in excess of $20 million – will be distributed among the Vizhnitzer courts and among close family members of the admorim, as R’ Menachem Zev did not merit to leave behind any children.