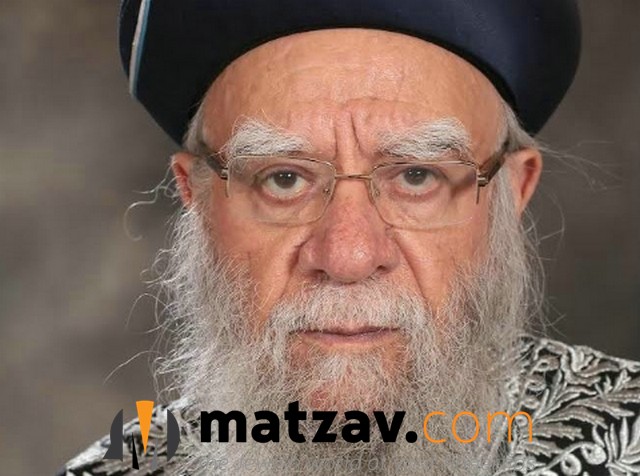 It is with great sadness that Matzav.com reports the passing on Motzoei Shabbos of Rabbanit Tova Bakshi Doron a”h, mother of Rishon L’Tzion Rav Eliyahu Bakshi-Doron. She was 108 years old.

Rabbanit Bakshi-Doron was born in Aleppo, Syria. Eighty years ago, she moved to Israel and married Rav Bentzion Bakshi-Doron, who founded the Yisa Bracha Sephardic shul and gabbai of the Rav Yochanan ben Zakkai shul in the Jewish Quarter in Yerushalayim.

Rabbanit Tova’s life revolved around the Torah education of her children and grandchildren.

A fascinating story is related about her son, who later became chief rabbi of Israel. When he was a young man, he was studying at a yeshiva in southern Israel. At the time, Rav Aharon Cohen, rosh yeshiva of Chevron Yeshiva, wanted the young Rav Bakshi-Doron to join Chevron, but his mother was ambivalent about it. Ultimately, Rav Cohen promised her that if she allows her son to join the illustrious yeshiva, she would merit arichus yomim. Indeed, she was zocheh to extreme longevity and was lucid until virtually the end of her life.

In recent years, she lived in the Rechavia neighborhood of Yerushalayim.

The levayah will be held tomorrow, Erev Rosh Hashanah, at the Sefardic bais halevayos on Har Hamenuchos.