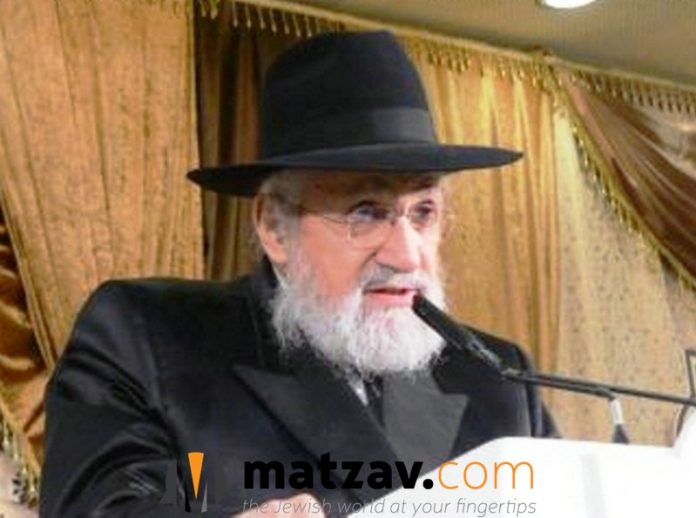 It is with great sadness that Matzav.com reports the passing of Rabbi Avrohom Halpern z”l, noted tomeich Torah. He was 80 years old.

Reb Avrohom was special individual, who devoted his kochos to helping others, to supporting mosdos haTorah, to harbotzas haTorah, and to his own aliyah and avodas Hashem. He was a kind baal chesed whose chashivus for Torah and whose yiras Shomayim can be seen in his children, who are carrying on his derech in Torah, chesed and avodas Hashem.

Reb Avrohom learned Torah and built Torah for decades, serving as a role model to so many people of the way a Yid should conduct his life.

Reb Avrohom, who resided in Manhattan, NY, maintained close ties with the Chassidic groups of Ruzhin, Boyan and Chortkov. Longtime nosi of Keren HaShviis, he was a son of Reb Nochum Yoel Halpen, noted askan in Tel Aviv and Bnei Brak, and a grandson of Reb Yaakov Halpern, founder of the Zichron Meir neighborhood in Bnei Brak.

Reb Avrohom’s support of Torah followed a path set for him by his father, Reb Nochum Yoel, and his zaida, Reb Yaakov, who were both recognized for their devotion to the frum community in Bnei Brak, where they were largely responsible for much of the growth of the city’s mosdos. The Halpern mishpacha was known in Eretz Yisroel for their support of Torah and for their close kesher with gedolei Torah, who highly respected their philanthropy, their hashkafah, and their chashivus haTorah.

Reb Avrohom’s sterling middos were lessons in themselves. His sensitivity to others and the purity of his personality were unique. He was respected as a bona fide talmid chochom who possessed wide-ranging yedios in Torah.

The levaya will take place at 11 a.m. at Shomrei Hadas Chapels, located at 3803 14th Avenue in Boro Park, Brooklyn.

The aron will then be flown to Eretz Yisroel, where kevurah took place at the Zichron Meir Bais Hachaim in Bnei Brak.