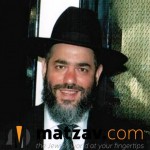 Family, friends and talmidim are mourned Rabbi Reuven Biermacher (also spelled Birmajer) the Argentinian-born rebbi who was stabbed to death by Palestinian terrorists yesterday at Shaar Yaffo in Yerushalayim.

Rabbi Biermacher, a father of seven, was a member of the faculty at Aish Hatorah.

He was a resident of the Yerushalayim suburb of Kiryat Yearim and was buried on Har Hamenuchos.

He was a man “full of joy and life,” Zvi Klor, director of the Spanish program at Aish Hatorah, said.

Born in Buenos Aires to a secular family, Rabbi Biermacher, 45, moved to Eretz Yisroel five years ago after becoming frum.

His brother is author and screenwirter Marcelo Birmajer, a well-known figure in Argentina.

The DAIA and AMIA Jewish groups in Argentina both condemned the killing.

“The DAIA firmly condemns this abominable crime against a defenseless citizen, which happens daily in Israel, but this time took the life of a spiritual leader belonging to the Argentine Jewish community,” the group said in a statement, according to the Buenos Aires herald.

Argentina’s ambassador to Israel called the killing “tragic and sad.”

Rabbi Steven Burg of Aish said that Rabbi Biermacher “spent the morning teaching Torah and was murdered on his way out of the Old City.”

Also killed in the attack was Ofer Ben Ari, 46, a father of two girls, who died after being mistakenly shot by police amid the chaos of the attack. His levaya is scheduled for 2 p.m. today in Yerushalayim.

“He was a hero, we have good memories. He was a man of gold who never harmed anyone,” Ben Ari’s 16-year-old daughter told the Walla news site.

“He was always supportive and he could not even kill a bug,” she said. “It is hard and we cannot stomach it, that such an amazing person died. It is inconceivable. He was murdered for nothing,” she said.

{Matzav.com Israel, Times of Israel contributed to this report}