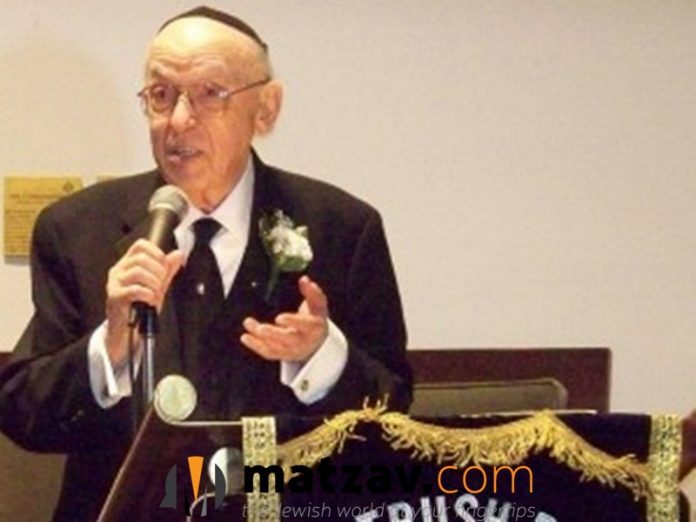 It is with great sadness that Matzav.com reports the passing on Shabbos of Rabbi David Halpern z”l. He was 87 years old.

Rabbi Halpern was the founding rov of Flatbush Park Jewish Center, where he served for some six decades, starting in 1952, at age 23, shortly after he received semichah at Yeshivas Rabbeinu Yitzchok Elchonon in New York City.

The minyan began on Avenue N in Flatbush, where Rabbi Halpern fought to keep his shul Orthodox, despite pressures from some quarters to turn it into a Conservative temple. The shul later resettled on Avenue U, between 63rd and 64th Streets.

Rabbi Halpern is credited for guiding generations of mispallelim in their Judaism, bring them close to mitzvah observance and advising them in halacha and hashkafa.

Rabbi Halpern retired in 2012 and was replaced by Rabbi Yisroel Perelson.

Rabbi Halpern lived a colorful life, which included stints in the New York National Guard for several summers. He was a member of the New York Board of Rabbis.

The levayah is being held now at the Flatbush Park Jewish Center. Kevurah will take place at Beth David Cemetery on Elmont Road in Elmont, NY.

Rabbi Halpern is survived by his wife, Mrs. Sheila Halpern, their three children, and grandchildren.