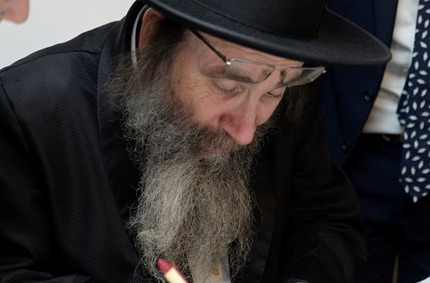 Moishy* was just 13 year old when his parents passed away in a car crash. The young boy was at a friend’s house when they received the news. From that point on, he  became responsible for his own wellbeing, and the wellbeing of his siblings. Working whichever odd jobs he could find, Moishy began to save up. He could not dismiss, however, his late father’s legacy:

The boy’s father had wanted for his son to have the opportunity to learn Torah. And so, in his father’s memory, Moishy spends his days in the beis midrash, and his nights in the yeshiva kitchen. Long after the rest of the bochurim have gone to bed, the young man cooks for the following day.

Recently, in a simcha tinged with sadness, Moishy became engaged. With very limited savings, and no family to help him make a wedding or establish a  home, he has already begun to experience humiliation.

There is, however, some hope: Moishy and his kallah applied to the Kupat Ha’Ir orphan wedding campaign, and were approved.

If this month’s campaign is successful, this hard-working chassan and others like him will have the opportunity start their married lives with some financial security.

For years, respected rabbanim such as Rav Kanievsky, Rav Shimon Galai and more have put their stamp of approval on the Kupat Ha’Ir orphan campaigns, often giving specific blessings to donors.

This month’s bracha is from Rav Binyamin Finkel shlit”a, who blesses those who contribute with “spiritual and material abundance for him and his descendants.'”

The campaign’s goal is to raise $1,000 for each couple, a package which would enable them to cover many basic expenses including simple wedding hall costs, and second-hand furniture. Donations are being accepted here for a limited time.

*Details do not belong to any one particular orphan – they are the amalgam of multiple cases, intended to illustrate the pain of an orphan chosson and kallah.