[P’sak under question below.] After a storm that followed a ruling published this morning regarding Shabbos elevators, Matzav.com has learned that, according to a prominent authority on this matter, contrary to what was reported in various news outlets and websites, Rav Yosef Shalom Elyashiv has not prohibited the use of Shabbos elevators.

This morning, the Israeli Hebrew language Yated Ne’eman published a new p’sak halacha from the gedolei haposkim prohibiting the use of Shabbos elevators. The p’sak, which can be seen below, states that those who use such elevators possibly transgress issurei de’oraisa. The p’sak was signed by Rav Shmuel Halevi Wosner, Rav Chaim Kanievsky and Rav Nissim Karelitz, with an added statement and signature from Rav Yosef Shalom Elyashiv.

The p’sak states that the way Shabbos elevators work has change technologically, and after reading the technical opinions of engineers who are experts in this area, it became clear to the poskim that by using these elevators, either for going up or down, it directly causes the performance of melacha de’oraisa.

The halachic debate surrounding the Shabbos elevator has existed for many years, basically since the advent of this type of elevator. Gedolei haposkim of past generations have given their halachic approval for the use of these elevators on Shabbos, as, based on the testimony of engineers, it was determined that a person riding the elevator does not cause the elevator to work harder whatsoever, and riding it does not cause any chillul Shabbos. There are those who only take the elevator up and not down, based on the technological explanations of engineers. Further examination of this specific halachic consideration is beyond the scope of this report.

The p’sak that was released today, however, changed the generally accepted heter regarding the Shabbos elevators. The institutes that give the hashgacha on Shabbos elevators state that they do not understand what prompted the p’sak.

Rabbi Yisroel Rosen of the Zomet Institue said today that the previously accepted heter was based on a p’sak of Rav Shlomo Zalman Auerbach, and that he had not heard of any change in p’sak since that heter was issued years ago. He says he does not understand the sudden tumult regarding this matter. “There is the utmost importance to to hear the other side, and in this matter there is definitely another side.” said Rabbi Rosen. “The halachic ruling must be reasoned, and unfortunately this is not a reasoned decision.”

Rav Levi Yitzchok Halpern, who heads the Yerushalayim Institute for Technology and Halacha, responded that he has written a sefer on the topic “and those who want can go and learn the subject in depth.”

“Shabbos elevators are mutar according to all gedolei Yisroel with whom I spoke and there isn’t any change in the matter,” said Rav Halpern.

What happened now? How did such a p’sak, like the one today, come out?

Rav Halpern: “I heard that that it was an engineer who went to the homes of gedolei Yisroel and explained to them that Shabbos elevators cause chillul Shabbos. Apparently, the engineer did not know what he’s talking about. I know hundreds of engineers who have no idea what they are talking about on these issues. On this basis, the p’sak was released. I studied the subject. I had to find reasons why to forbid it, not why to permit it.”

Rav Elyashiv signed today’s p’sak. Did he rely on this amateur engineer?

Bottom line, can one use a Shabbos elevator?

Rav Halpern: “As long as we do not hear about new elevators that cause chillul Shabbos, the p’sak has not changed.” 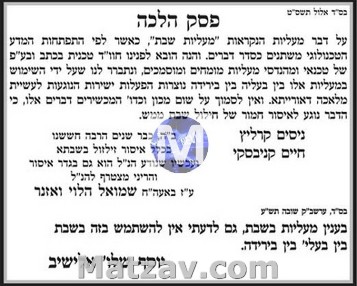