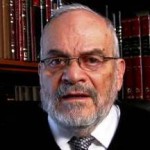 I rarely if ever comment or disagree with pronouncements or public statements of other rabbis. These are people who are driven to publicity and even sensationalism and I never feel inclined to spoil their fun. However, every so often there comes along a rabbinic pronouncement so outrageous and damaging that even my reticent nature forces me to respond.

A rabbi is reported in public print and electronic media to have claimed that only one million Jews died in the Holocaust and that because of assimilation and intermarriage, the other approximately five million victims were not “real” Jews.

This claim is outrageous on numerous grounds – certainly in outlook but moreover in the sheer stupidity of not realizing the harm that such a statement by a rabbi can have in today’s anti-Jewish and anti- Israeli world. The rate of Jewish intermarriage in pre-World War II in Eastern Europe was relatively small – probably less than five percent. Even amongst the Communist Jews in Russia, the intermarriage rate before the war was low and only grew substantially later as a result of the war itself.

Thus, the three million Polish Jews, the million Jews of Lithuania, Belarus and Ukraine were all Jewish even by any stretch of halachic exclusionary stringencies. The Jews of Slovakia, Hungary, Bohemia, and Romania were more assimilated but not in the main intermarried. One has to remember that intermarriage requires two to tango and in anti-Semitic pre-World War II Europe, the non-Jews were loath to marry Jews even if the Jews were unfortunately willing to do so.

So the overwhelming majority of people whom the Nazis considered Jewish were in fact, halachically and in every other way Jewish. And that number is far closer to six million than one million.

It has been well established in Jewish tradition that Jews who are killed simply because they are Jews are considered holy martyrs no matter what the level of their religious observance in their lifetime. All Jews killed in the Holocaust were killed simply because they were Jews. Their designation as holy martyrs cannot be taken away from them by current political correctness in certain sections of Orthodoxy.

The rule of: “A Jew who sins is nevertheless still considered a Jew,” remains inviolate and in force even in today’s fractured Jewish society. Assimilated Jews are still Jews as are Jews who somehow no longer affiliate themselves with Orthodoxy and traditional Jewish ideas and lifestyle.

Kamenev, Lenin’s colleague and a leading Communist leader who was Jewish and an atheist, was purged by Stalin and subjected to a show trial. When being led away to be shot, he muttered to himself Shema Yisrael. All Jews, and especially rabbis, should be very reticent about terming other Jews, no matter what their level of observance may be, as being out of the fold. This is especially true when the people being excluded were martyred simply because they were Jewish. Our motto should always be “A Jew is a Jew. A Jew is a Jew.” For, so it is in Heaven and on earth.

And finally, how does one in the current climate of hatred against our people and state ally one’s self with Abbas, David Irving, the mullahs of Iran and other assorted haters and liars in minimizing, if not even thereby denying the reality of the Holocaust?

Even if what the rabbi said had some truth to it, which it does not, why the publicity and the notoriety? Are there no opinions that somehow can remain bottled up within rabbinic minds and stomachs? Where is common sense and Jewish loyalty? The statement of one instead of six million is the classical man bites dog story that the media constantly hungers for.

Maybe the rabbi was naïve enough not to realize this, but we were long ago warned in Avot that “Wise men should be very careful with their words.” Silence is truly golden and sensationalist opinions and statements can only cause harm to all concerned. I have received emails from different types of Jews in different parts of the world asking my opinion about this rabbi’s comments about the Holocaust.

Apparently they think me to be some sort of expert on the matter, which I am not. However, their writing to me made me think that a response is truly necessary to this new and strange form of what can be termed rabbinic Holocaust denial. This article and my thoughts on this matter are the result. It is too damaging a matter to be left unanswered and unrefuted.